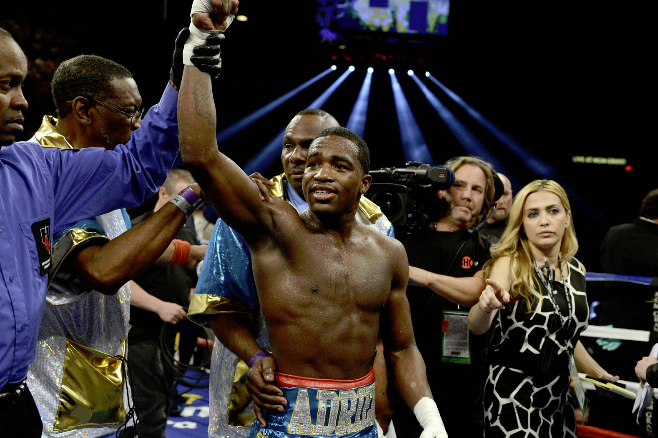 Adrien Broner is about freedom.

The charges in Broner’s felonious assault and aggravated robbery case were dismissed when the victim and chief witness for the special prosecutor failed to show up to court on Wednesday, according to Judge Robert Ruehlman’s chambers.

A special prosecutor — in this case attorney Michael Tranter — was assigned to handle the case by the Hamilton County Court of Common Please because the Hamilton County Prosecutor, Joseph Deters, is good friends with “one of the business people helping Mr. Broner and Mr. Deters wanted to avoid the appearance of impropriety,” Julie Wilson, a spokesperson for Deters told RingTV.com.  That business person is not believed to be Al Haymon.

It was the fourth time the victim failed to turn up for the start of a jury trial after missing court dates on April 26, June 7, Aug. 7, along with Wednesday, a spokesperson for the judge told RingTV.com. As a result, Judge Ruelhman dropped the charges on Wednesday and Broner is free to pursue his boxing career. It’s not known why the alleged victim didn’t show up, the spokesperson said. The man also dropped a civil suit against Broner earlier this year.

There are rumblings Broner (32-2, 24 knockouts) could be back in the ring in December at Barclays Center in Brooklyn, though nothing has been announced, a source close to Broner said. The promoter Lou DiBella has dates on hold for Dec. 10 and Dec. 17 at Barclays Center. Broner has called out junior welterweight titleholder Ricky Burns, who has a mandatory defense Oct. 7 in Scotland against Kiryl Relikh. Broner is angling for Burns in December, the source said.

Broner was charged with felonious assault and aggravated robbery associated with a Jan. 21 incident outside a Cincinnati bowling alley. Broner allegedly assaulted the man and fleeced him of $12,000, allegedly pulling a gun on him. The Cincinnati native and former four-division world champion was jailed for 30 days on July 19 for failing to appear for a scheduled hearing.

Broner looked haggard and disheveled when he finally appeared in court. “Somebody put something in my drink (the previous night),” Broner told the judge, according to the Cincinnati Enquirer, which obtained a transcript of the proceedings. “I don’t even drink. I didn’t drink last night.” The judge wasn’t buying it. “You don’t look well,” he said. “You look like you have a hangover.”

Now, Broner can do what he wants after Wednesday’s development.