Ricky Burns has ‘more to give’, faces unbeaten Kiryl Relikh on Oct. 7 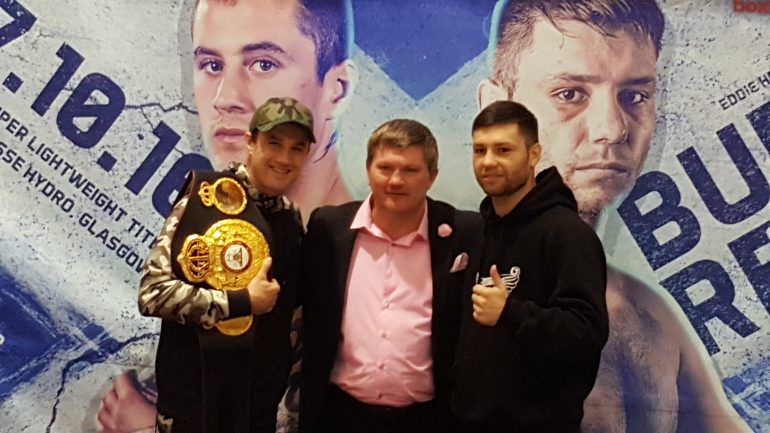 The popular Scotsman, who is rated No. 8 by THE RING at 140 pounds, won the vacant strap in June, when he thoroughly dominated Michele Di Rocco on route to an eighth-round stoppage and injected new life into a career which many thought to be in decline.

“More than anything else, I wanted to prove to myself that I still had more to give,” said Burns when speaking to RingTV.com in Glasgow on Monday. “I’ve done that and, to be honest, if I didn’t feel that I could still compete at top level, then I wouldn’t be boxing.

“I’ve watched a few rounds of (Relikh) and he’s a puncher who’s always looking for hooks but I’ve been in with so many big punchers and that doesn’t bother me. He’s never been over eight rounds and that goes in my favor.”

The unbeaten Relikh (21-0, 19 KOs) is trained and promoted by former two-weight world titleholder Ricky Hatton, who is very confident that his charge will have no issues whatsoever in a championship fight.

“Kiryl hasn’t boxed at Ricky’s level but he’s definitely ready,” said Hatton. “He’s a big puncher with a nasty streak. He has flattened everyone he’s been in with and trains so hard that he can do 12 rounds with a world-class fighter like Ricky.

“Kiryl is the real deal and I wouldn’t work with someone I didn’t think could go all the way. Ricky has the rounds under his belt but Kiryl won’t gas.”

Tom Gray is a UK Correspondent/ Editor for RingTV.com and a member of THE RING ratings panel. Follow him on Twitter @Tom_Gray_Boxing