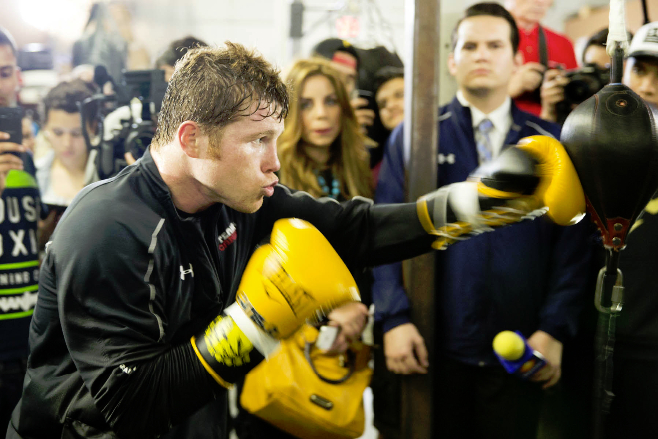 ARLINGTON, Texas – Oscar De La Hoya admitted that one possible scenario for Canelo Alvarez if he wins his junior middleweight title fight against Liam Smith on Saturday would be to defend his title, which seems to be at odds with the idea that he should start facing middleweights if he’s going to eventually take on 160-pound champion Gennady Golovkin.

“Look, if Canelo feels like he wants to defend the title, then we’ll start searching for the best opponent there at 154,” De La Hoya told RingTV.com on Thursday. “If he decides to make the transition to 160, then we’ll do what’s best for Canelo. Whatever Canelo decides and feels, we’re going to be with him 100 percent.”

Golden Boy officials have stated the winner of the middleweight co-feature between Gabriel Rosado and Willie Monroe Jr. on Saturday at AT&T Stadium on HBO Pay-Per-View could face Canelo in December in New York if Canelo beats Smith.

De La Hoya stressed that Golden Boy will huddle with Canelo afterward to map out his immediate future and that a number of options are possible.

De La Hoya says an oral agreement is in place for Canelo to face Golovkin in the fall of next year.