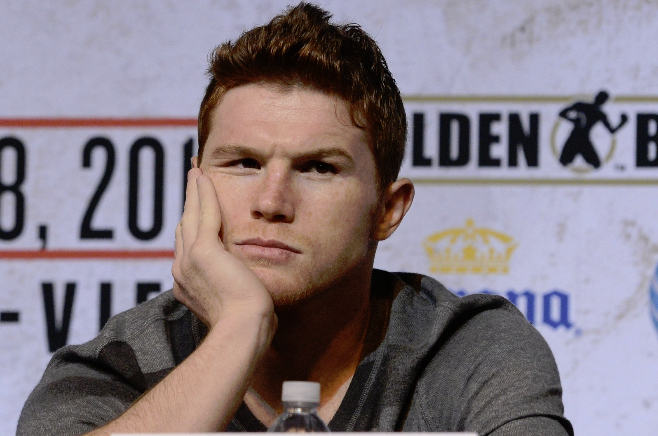 ARLINGTON, Texas – Canelo Alvarez was widely mocked for calling Gennady Golovkin into the ring following his devastating knockout of Amir Khan and saying the now infamous phrase, “Like we say in Mexico, we don’t (expletive) around.” He then proceeded to vacate his middleweight title and not fight Golovkin

Asked about those comments on Thursday on the threshold of another fight on Saturday against Liam Smith at AT&T Stadium in Arlington, Texas, a relaxed Alvarez said he had no remorse or shame uttering those now famous words.

“No, I have no regrets whatsoever,” Alvarez said through translator/Golden Boy matchmaker Robert Diaz before Thursday’s final press conference. “There’s no reason to. I said it because I want that fight and that’s the fight for the fans that they want. And it will happen.”

Golden Boy CEO Oscar De La Hoya has stated there is a verbal agreement to face Golovkin this time next year. However, Alvarez didn’t really hew to that timetable when discussing when he wants to face Golovkin. “Any day, anytime,” he said. “When the negotiation is done I’ll be ready. The ones that need to worry about and be preoccupied with it are them. Not me.”

Canelo, 26, seemed encouraged by what he saw of Golovkin last Saturday against Kell Brook. Before Golovkin chopped Brook down and stopped him in the fifth round, Golovkin absorbed some clean shots.

“Look, I’ve always known what he has and what he doesn’t have,” Alvarez said on Thursday. “The opponents that they’ve had in the past — we haven’t seen anything different. But now he had an opponent that moved a little, that threw combinations. Even though he was in a smaller weight class, we saw what we saw. And at the same time, I’ve never worried about him or others. I’m worried about me, making my history and my career.”

Alvarez didn’t seem too concerned with trying to outdo Golovkin’s performance in his fight with Smith on Saturday on HBO PPV for Smith’s junior middleweight title. “I’m going to say it one more time — they need to worry,” Alvarez said. “They need to try to make something happen, not me.”