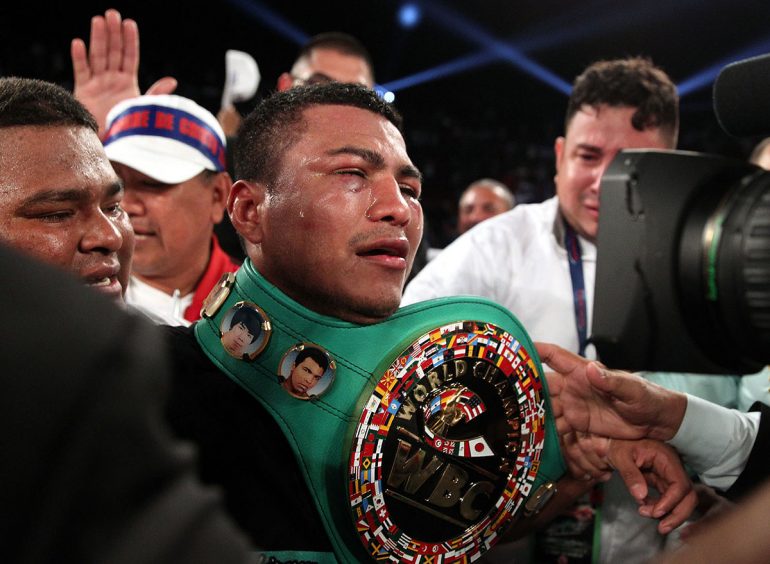 Roman Gonzalez continues to add to his legacy.

The hard-charging Nicaraguan met more resistance than we’re used to seeing against the naturally bigger Carlos Cuadras on Saturday in California but he maintained his perfect record and won a major title in a fourth weight class, the junior bantamweight division.

As a result, Gonzalez (46-0, 38 knockouts) earned a place in the 115-pound ratings. The question with which the RING Editorial Board and Ratings Panel wrestled was which place, No. 1 or No. 2?

No. 1-rated Naoya Inoue, unrated at the time, knocked out then-No. 1 Omar Narvaez in two rounds to win his version of the 115-pound title in December 2014 and has successfully defended three times.

Gonzalez, also unrated at 115 and fighting for the first time as a full-fledged junior bantamweight, defeated No. 2-rated Cuadras by a hard-fought unanimous decision.

In the end, we decided to leave Inoue (11-0, 9 KOs) at No. 1 and have Gonzalez enter at No. 2 because of the Japanese fighter’s more-impressive title-winning victory and the fact he is more established in the division.

Of course, that sets up a potential showdown for the RING championship, which would allow the Nos. 1 and 2 fighters to determine in the ring where they belong in our ratings.

Also, Cuadras remained at No. 3 after a strong performance. Takuma Inoue (No. 10 last week) dropped out to make room for Gonzalez.

Gonzalez (No. 1 last week) remains on top of the pound-for-pound list with his victory over Cuadras. Gennady Golovkin (No. 3) also stays put after his fifth-round knockout of Kell Brook on Saturday in London.

Callum Smith (No. 6 last week) remained where he is after he stopped Norbert Nemesapati (unrated last week) in six rounds Saturday in London.

Golovkin (No. 1 last week) held his position after defeating Brook (unrated at 160 pounds). Also, Danny Jacobs (No. 2 last week) retained his spot by knocking out Sergio Mora (unrated last week) in the seventh round Friday in Reading, Pennsylvania.

Brook (No. 1 last week) will remain on top of the 147-division until it’s more clear where he’ll campaign going forward. He has suggested he’ll fight at 154 pounds.

Robert Easter (No. 9 last week) defeated Richard Commey (No. 7 last week) by a split decision on Friday in Reading. As a result, Easter moved up to No. 6. Commey, who looked sharp in defeat, retained his position

Lee Haskins (No. 6 last week) remained where he is after defeating countryman Stuart Hall (unrated last week) on Saturday in London.