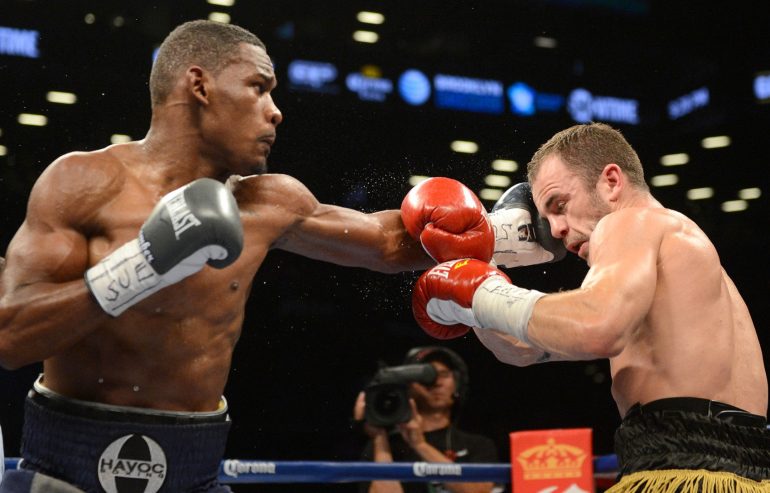 GRAPEVINE, Texas – Danny Jacobs’ other advisor laid out the various deal points that will be considered in order for a fight with middleweight champion Gennady Golovkin to be made, providing a window into what ought to be fascinating negotiations.

Keith Connolly, Jacobs’ longtime advisor, said that “preliminary discussions” have already started between Golovkin promoter Tom Loeffler and Al Haymon, Jacobs other confidante. “Al and Tom are communicating,” Connolly told RingTV.com on Wednesday morning. “I think we’ll know in the next few weeks if the fight can be made.”

The WBA mandated on Saturday that Golovkin (36-0, 33 knockouts) and Jacobs, who holds a secondary middleweight title, have 30 days to make a deal and 120 days to stage a fight. To do so, a number of issues will have to be sorted out, from which network the fight will be on, to the venue, to how it will be promoted, all of which Connolly has strong opinions on and has confidence “I think we can come to terms.”

One aspect that won’t have to be amended is Jacobs’ confidence, which grew twofold after he watched Golovkin take unnecessary punishment against Kell Brook on Saturday before stopping him in the fifth round.

“Danny said he saw everything he needed to see to know he can beat GGG,” Connolly said in a phone interview. “Danny said he saw it’s not too hard to land on GGG. The fact that Kell Brook sort of stunned him a couple times and Danny knows that if he lands those kinds of punches it would be very interesting to see how GGG would react. Danny is more convinced more than ever that he can knock out GGG.” He added, “I think more people think that Danny has a chance to beat GGG than Canelo would.”

Jacobs’ camp will try to place the fight at Barclays Center in Brooklyn, where Jacobs is from and where he knocked out Peter Quillin in 85 seconds last December. Connolly said the fight could happen in December but a more likely scenario is for it to take place in the first few months of 2017 if it does happen next.

“We definitely think it makes the most sense to fight at the Barclays Center,” Connolly said. “I think that’s monetarily the best place to fight. I think it’s surpassed MSG at this point in terms of where big events should be put in New York. We’d like to fight in Brooklyn. That’s what we’re angling for and what we’re discussing right now.”

Connolly believes that for both fighters to make career-high paydays and in order to maximize interest, the fight should be on pay-per-view, driven by either the “24/7” or “All Access” franchises to highlight their intriguing back-stories. Jacobs (32-1, 29 KOs) is a cancer survivor who has gone on to become one of the world’s top middleweights; Golovkin has emerged as perhaps the most feared fighter in the sport after starting in relative obscurity.

“I think if they built it up the right way, I think it could be a pay-per-view fight,” Connolly said. “As far as what network it would be on, I think it’s too early to know that. GGG is with HBO and Danny has fought on Showtime a bunch of times so the powers that be would have to work that out. But I think for a fight this big — I do think it deserves to be on pay-per-view. I think it can be built into a mega-fight. I think along with Ward-Kovalev, this would be the biggest fight of the year.”

If those hurdles end up being too high and both parties can’t make a deal, the bout would go to purse bid. Haymon, who has made control a chief signature of his tenure in boxing, would almost certainly try to gain jurisdiction of the fight, though he didn’t win the purse bid in Deontay Wilder’s fight with Alexander Povetkin in May.

Haymon would almost certainly put the bout on Showtime if he won the purse bid, a conflict for Golovkin, who is signed exclusively to HBO. If Golovkin didn’t go through with the fight because of network rivalries, he would be stripped of the title, which would be a fascinating turn of events.

Connolly has been vocal about trying to make the most money for his client and he stressed that if the money isn’t there to face Golovkin next, Jacobs would put off the fight until it makes financial sense. Connolly declined to get into specifics about how much Jacobs would have to make.

“This is a business and it’s also the biggest fight out there in the middleweight division,” Connolly said. “So I would think a guy like Danny, who’s earned the right to make a lot of money — GGG and Danny are the No. 1 and No. 2 guys in the division — so anytime there’s a mega-fight in the division you want to get compensated. So if the money is right, we’ll take the fight. If the fight needs to be built up to make the right type of money, we’ll do it in a couple of fights. But by no means is Danny ducking him. He’s very eager to fight GGG.” But he added, providing more than just a ray of hope to fans eager for the fight to happen, “I think we can come to terms.”