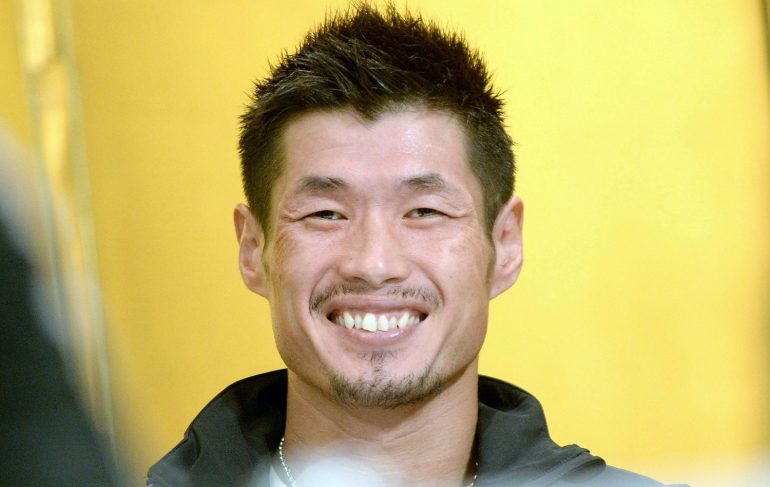 Hozumi Hasegawa was the premier bantamweight in the mid-to-late 2000s. The Japanese southpaw made 10 successful defences of his WBC 118-pound title during a five-year reighn. After losing his title he stepped up to featherweight and briefly reigned there.

Hasegawa was the second eldest of five children who took up boxing because of his father. Initially starting when he was in the second grade but stopped to concentrate on his school work in middle school but returned to the sport when he was 17.

He turned pro in late 1999, losing in two of his first five outings. However, Hasegawa put things right winning his next eight bouts to set up a meeting with vastly more experienced Jess Maca for the OPBF 118-pound strap, a hard fight ensued before Hasegawa prevailed by close split decision.

Three defenses helped Hasegawa gain further experience and he was matched with long-reigning WBC champion Veeraphol Sahaprom in the spring of 2005. Hasegawa rose to the occasion out-boxing the defending champion to sneer his first world title by unanimous decision.

“My proudest moment is when I became the WBC bantamweight champion by winning against Veeraphol Sahaprom,” Hasegawa told RingTV.com through Tomoyuki Kataoka.

One defense followed before he met Sahaprom in a rematch, Hasegawa had clearly grown as a fighter despatching the Thai legend in nine rounds with a terrific right hook.

Early in his title reign Hasegawa was more of a boxer, outpointing the likes of respected Mexican veteran Genaro Garcia and future featherweight titleholder Simpiwe Vetyeka. As he grew as a fighter he morphed into a knockout artist, stopping five challengers in a row – all inside four rounds – at the back end of his tenure as champion.

In the spring of 2010, Hasegawa met WBO ruler Fernando Montiel.

The defending WBC beltholder took an early lead until he got caught by the Mexican in the final seconds of the fourth round and was stopped.

He deliberated retirement but decided to migrate to 126 pounds where he took on Juan Carlos Burgos for the vacant title. It was a bitter-sweet moment in the career of the humble Japanese fighter whose mother passed away from cancer.

“My best performance is when I became the WBC featherweight champion by winning against Juan Carlos Burgos,” he explained. “The match was especially memorable for me since my mother died about one month prior to the match.”

He was never the force at featherweight that he was at bantamweight and dropped the title in his first defense against heavy handed Jhonny Gonzalez.

After four rebound wins he challenged IBF 122-pound ruler Kiko Martinez. Although he was ahead on one scorecard, the aging Hasegawa simply couldn’t fend off the hard-charging Spaniard and was stopped in the seventh round.

The 35-year-old veteran is a four-time winner of the annual boxer MVP award given by the Japanese Boxing Commission. Hasegawa (35-5, 15 knockouts) has won twice since the loss to Martinez. He meets Hugo Ruiz for the WBC junior featherweight title on Thursday in a bid to fill in the blank between 118 and 126.

“I am very proud of challenging against a wonderful champion,” he said. “I will do my best to win the championship. I am happy to fight in any weight class, however, I am convinced that at junior featherweight I will be able to do my best and give a good performance.

“This will be my last chance. I will do my best to train and prepare for this fight in order to not have any regrets later [in life].”

Hasegawa lives in Kobe, Japan with his wife and two children. He says he particularly enjoys playing table tennis with his son. The Japanese maestro has an autobiography called “Where There is a Will There is a Way.”

He graciously agreed to speak with RingTV.com about the best he faced in 10 key categories.

BEST JAB
Veeraphol Sahaprom: In my bout against him on April 16, 2005, he utilized his straight punches with no motion as jabs, pulling the arm prior to punching, similar to the back-swinging in golf or cocking the hand in baseball. Especially, as a southpaw boxer, those punches looked like jabs.

BEST DEFENSE
Fernando Montiel: It was very hard for me to land my punches on him, he prevented me from landing my punches.

BEST CHIN
Juan Carlos Burgos: As compared with the rivals I had fought in the bantamweight class, he was a featherweight boxer, was a tough opponent for me at that time.

FASTEST HANDS
Montiel: His so-called “punches with no motion” were difficult to defend. This means punching without pulling the arm prior to punching. That is to say that there is no prior approach to punching. He was very good at immediately giving me punches without motion.

FASTEST FEET
Simpiwe Vetyeka: He always moved very quickly. In addition, he was good at keeping a certain distance between us, where he could defend my punches and also land jabs against me.

SMARTEST
Sahaprom: He had (a lot of) experience with 12-round matches and also had a career of Muay Thai (kickboxing). In accordance with those experiences, he could land his right-hand punches on me with good timing. In other words, he knew of how to land his punches on an opponent. I can say that he knew boxing very well.

STRONGEST
Kiko Martinez: He was very powerful and always stepped forward to me. His pressure was very good, he stayed close to me throughout the fight.

BEST PUNCHER
Jhonny Gonzalez: He had very hard punches. His punches (weren’t very fast) compared with those of other rivals, but his left hooks came to the right side of my head suddenly. He set them up well. If I managed to keep away from one punch, I would have been knocked out by another punch.

BEST SKILLS
Montiel: His skills were the best I have seen ever. He could utilize his small but natural feint with his eyes, feet and body just like he was doing during his sparring. Without experience he couldn’t do those things.

BEST OVERALL
Sahaprom: I prevailed against him twice. He had great experiences against many boxers ranked by world sanctioning bodies. He could fight very well against both orthodox and southpaw. Sahaprom kept away from my punches very well in the fight. In addition, I have respected him as a person since he always lived in a dormitory house at his gym even though he was a world champion. He was always hungry and ready to fight with any opponent.