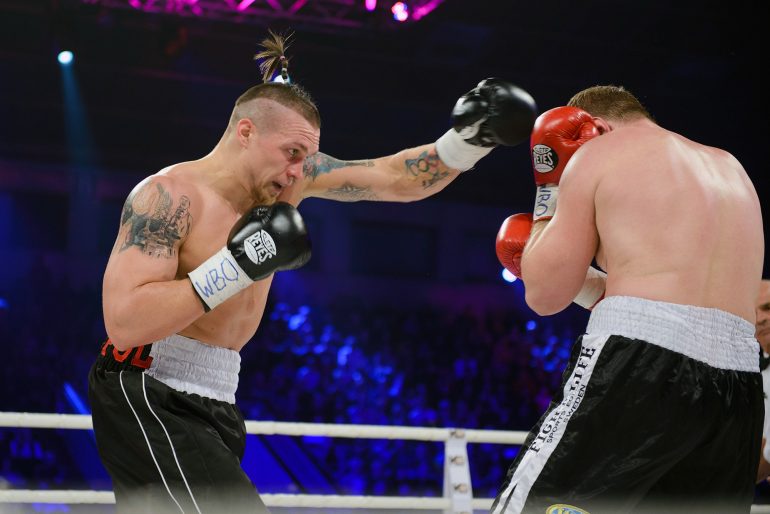 Oleksandr Usyk will challenge Krzysztof Glowacki for the WBO cruiserweight title at the Ergo Arena, Gdansk, Poland, on Saturday.

Usyk (9-0, 9 knockouts) was a standout amateur who won gold at the 2012 Olympic Games, and since turning pro in late 2013 he’s been flawless en route to becoming Glowacki’s mandatory challenger.

The big Ukrainian is confident of unseating the Pole despite having to travel to Glowacki’s homeland.

“I have a great chance to get the world title,” Usyk told RingTV.com through Yulia Diachenko of K2 Promotions Ukraine. “The only thought I have is: ‘I must enter the ring and reach my goal.’ That’s what I think when I fall asleep and when I get up in the morning now.

“I do not care where we fight, the main thing is to fight.”

Although Glowacki has home advantage and is more experienced as a pro, sporting a pristine (26-0, 16 KOs) ledger, Usyk’s world-class amateur background stands him in good stead.

As well as his Olympic success, he also won gold at the 2011 World Championships as well as the 2008 European championships. He also represented “Ukraine Otamans” as a super heavyweight in the World Series of Boxing, winning all six bouts in the semi-pro league. In total he won 335 of 350 amateur contests.

The 29 year old held a nine-week training camp as usual in the Carpathian mountains at Bukovel Ski resort in western Ukraine. Along with his team, Usyk traveled to Poland on Monday (Sept. 12).

Usyk isn’t unduly worried about what the champion will bring to the fight in a battle of southpaws and is instead concentrating on what he will do.

“I don’t know what will Glowacki come into the ring with, but I know for sure what I will have with me there,” he said. “I do not underestimate my future opponent – he is the champ and I respect him. This will be a clash of power, experience, mental strength, strategy and great will to win from both sides.”

Victory is important for Usyk, as he is seen as the heir to the Klitschko throne in Ukraine – where all but one of his nine pro fights to date have taken place. He has sponsorship deals with MTC (one of two biggest Ukrainian mobile companies) and was the brand face of Gillette Fusion Proglide.

“This means that Ukraine will get one more world champion [laughs],” he explained. “And I greatly appreciate my fans and family for their huge support and love they share with me. This is a very good motivation to work hard and win.”