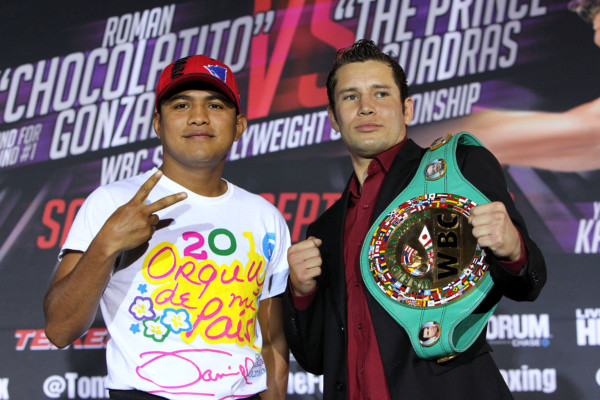 Roman “Chocolatito” Gonzalez represents what is good for Nicaragua. And boxing as well. Some may say Gonzalez is the greatest from the Central American country.

Gonzalez knows he is carrying the admiration and support from a country that was engulfed in civil war not too long ago. Those fans hang onto every punch he throws and gasp whenever he receives a telling blow.

The same could have been said about the late Alexis Arguello. Crowds would surround the smallest of televisions while he fought Aaron Pryor in the late-1970s and early-’80s.

Arguello saw promise in a young Gonzalez, which is why he would help train and mentor him as Gonzalez fought for his first major title at 105 pounds.

Fast forward to Saturday and, while Gonzalez may not have Arguello in his corner, “The Explosive Thin Man’s” presence remains as Gonzalez could pay homage him with a victory over Carlos Cuadras.

Gonzalez will challenge Cuadras for his WBC junior bantamweight title at The Forum in Inglewood, California. The 12-round bout will follow the rematch between junior middleweights Jesus Soto-Karass and Yoshihiro Kamegai.

Both fights, along with the replay of the Gennady Golovkin-Kell Brook middleweight title bout from earlier in the day, will air on HBO, beginning at 10 p.m. ET/ 7 p.m. PT.

THE RING magazine/WBC flyweight champion, Gonzalez (45-0, 38 knockouts) is moving up in weight from 112 pounds to challenge Cuadras, who also enters the fight unbeaten at 35-0-1 (27 KOs).

Gonzalez is at or near the top of many boxing publications’ lists of top fighters in the world. But some are beginning to make a case whether Gonzalez has surpassed Arguello as the greatest fighter to come out of Nicaragua.

Naturally, that is very debatable. In previous interviews, even Gonzalez has stated no one, including him, could ever duplicate or surpass the accomplishments Arguello made in boxing and for Nicaragua.

But Arguello failed at winning world title belts in four weight divisions. A victory over Cuadras could give Gonzalez a major title in four separate weight classes. A victory is also one step closer to the milestone number of 50 victories.

Gonzalez, THE RING’s No. 1 pound-for-pound fighter, is taking the fight against Cuadras in stride.

“I never think about losing. The only way I can lose is if somebody truly beats me,” said Gonzalez during this past week. “I won’t beat myself and I won’t overlook anyone.”

Cuadras, who resides in Mexico City, is that fighter who could give Gonzalez problems. Some wonder whether Gonzalez will be able to carry his power up another weight class.

Gonzalez has also been bombarded by questions on whether he will face WBO junior bantamweight beltholder Naoya Inoue or WBA/WBO flyweight titlist Juan Francisco Estrada, both of whom will be ringside on Saturday night.

“I don’t think about other fights or how high I can move up. I just focus on Saturday night against Cuadras.”

Those fights against Inoue and Estrada could wait. For now, Gonzalez has a possible date with destiny on Saturday night. Gonzalez winning a world title belt in a fourth weight class would make him the greatest fighter to come out of Nicaragua and could solidify him as the best fighter in boxing today.

But Gonzalez knows to whom he will pay homage if he receives the WBC title.

“This fight is for all my people in Nicaragua and especially dedicated to my mentor, the great Alexis Arguello.”

Francisco A. Salazar has written for RingTV since October of 2012 and has covered boxing in Southern California and abroad since 2000. Francisco also covers boxing for the Ventura County (California) Star newspaper, BoxingScene.com and Knockout Nation. He can be reached by email at [email protected] or on Twitter at FSalazarBoxing.