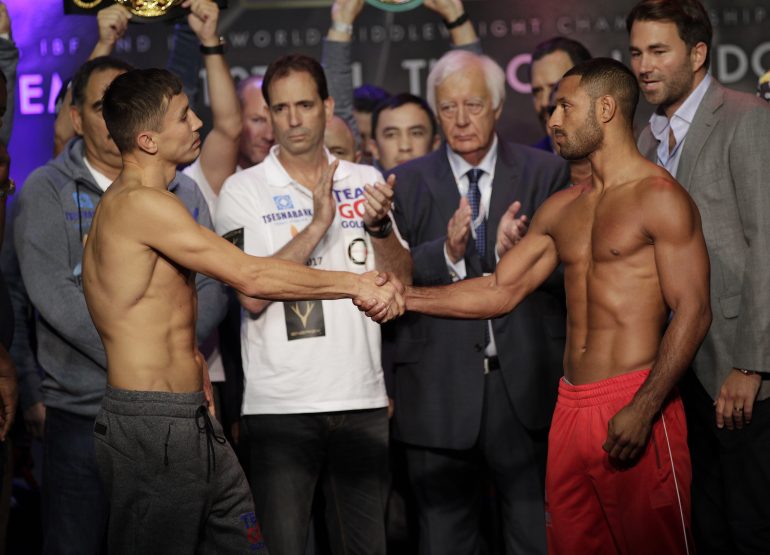 Gennady Golovkin isn’t expected to have too much trouble against Kell Brook if he performs up to his usual standards. But a new wrinkle was added to the discourse when reports surfaced that Golovkin left Thursday’s press conference without lingering around and looked sapped of energy, as Brook’s promoter, Eddie Hearn suggested.

Golovkin(35-0, 32 knockouts) easily made weight on Friday, tipping the scales at 158.8 pounds while Brook, a welterweight titleholder, actually topped him at 159.4, casting doubt on whether Golovkin had to labor to get under the middleweight limit. But Hearn’s comments raise an interesting issue that may or may not figure into Saturday’s fight at London’s 02 Arena on HBO (5:30 p.m. ET) for Golovkin’s IBF and WBC middleweight titles.

While Brook (36-0, 25 KOs) is rising two weight classes and had to pack on the pounds for the fight, Golovkin, regarded as a smallish middleweight, had to cut weight, a development that theoretically should have been harder for him to accomplish than it would be for Brook, as Hearn suggested.

“I don’t think Golovkin looked that great,” Hearn said on Thursday, according to The Guardian. “I thought he looked a little drawn in the face. They scuttled off after and didn’t want to talk to any of the media.”

Tom Loeffler, Golovkin’s promoter, explained the quick departure at the press conference due to jet lag and being “tired after traveling from the US, and restless after being stuck in London traffic for over an hour”, the Guardian wrote. And Golovkin’s trainer, Abel Sanchez, similarly dismissed any chatter that Golovkin may be drained or under the weather as false. Whatever he saw in Golovkin’s face, it seemed to augment Hearn’s confidence in Brook on Saturday.

“They feel invincible as a team,” Hearn said. “They feel they can just rock up to these cities, go out, knock people out, collect the money and off they go. When the fight was first made they thought it was going to be an easy knock-over job. Now they know they’re in a real fight.” Those wondering if Golovkin damaged himself to make the weight will find out for sure on Saturday.