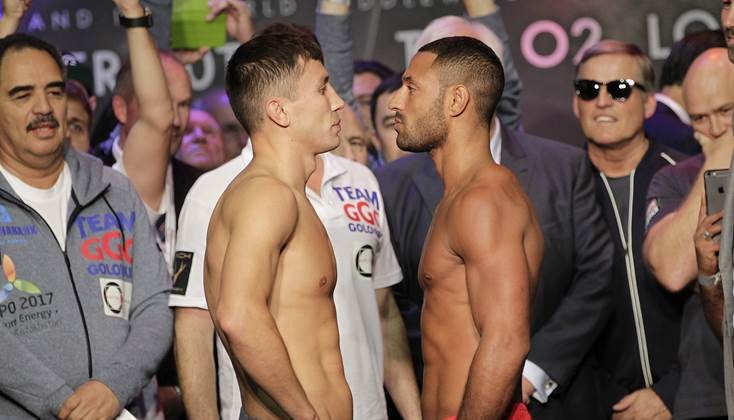 Gennady Golovkin and Kell Brook have weighed in successfully for their IBF and WBC middleweight title bout, which takes place at the O2 Arena in London, England, on Saturday.

Brook, who is rated No. 1 by THE RING at welterweight, was on the scales first and looked to be in excellent fighting shape at 159.4 pounds. Alarm bells were raised weeks ago when the British star registered a whopping 176 pounds at a mandatory check weight, but doubts over his preparation can finally be put to bed. 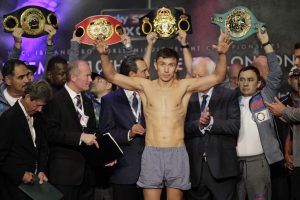 Golovkin, who is rated No. 1 by THE RING at middleweight, received almost as good a reception as Brook for his U.K. debut. The fearsome Kazakhstani weighed in at 159 pounds and looked more than ready for his 17th world title bout.

The two men shook hands after a prolonged head-to-head.

“I looked into his eyes and I could see fear,” said Brook during an interview with Sky Sports News. “(Golovkin) knows he’s in a real fight and I think he’s on edge. He’s uncomfortable because he can see in my eyes that I’m wanting this fight. 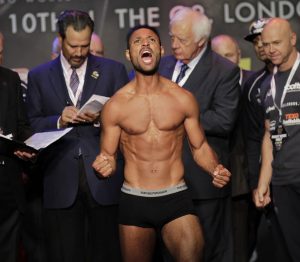 “I’m ready to shock the world. I’m at a more natural weight, the buildup has gone perfect and I’ve peaked at the right time. I’m ready to put my skills to the test on Saturday night. This is my time to shine and it’s written in the stars for me to do this. You can’t get any bigger than beating the man that everyone is afraid of.”

Is Brook whistling in the dark? Can he perform as a fully-fledged middleweight? And more importantly, can he take the power of Gennady Golovkin?

In just over 24 hours, we’ll have all the answers.