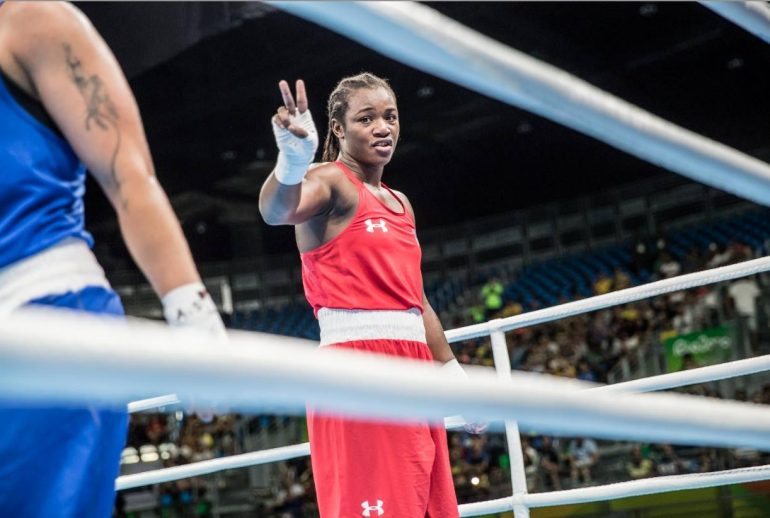 Claressa Shields is hoping to turn pro and then defend her gold medal at the 2020 Olympics in Tokyo.

The two-time Olympic champion from Flint, Michigan is waiting to hear if AIBA will change its rules to allow females to compete in the Olympics as pros as it does for men. In the meantime, the 21-year-old middleweight has received interest from such promoters as Lou DiBella, who has worked with a number of women, along with Roc Nation Sports, Golden Boy, Floyd Mayweather Jr., and even Adrien Broner’s About Billions, she said. If the right offer comes along, she will jump at it and say goodbye to the amateurs.

“A lot of promoters have reached out to my coaches and put some plans on the table,” Shields told RingTV.com on Thursday. “And if we agree with the plans and the money is right — we’ll do it. But if we can get the best of both worlds (and fight in the Olympics as a pro), like men, then ok. But if I have to go pro, I want to have a very good career where I can get paid to build my legacy, fight on TV, fight the best women out there.”

While Shields is a hot commodity after dominating the field in Rio last month, she hasn’t heard from the one handler she’d like to work with the most: Al Haymon. Some have advised her not to sign with a promoter and go the route of the PBC. “From what I know and from what I’ve learned is you want to have a good promoter,” she said. “And the best promoter who anybody says there is — is Al Haymon. So I would love to get a call from him.”

Whatever happens, Shields wants the same opportunities for women that have been afforded to male boxers. “If it was a man that had two Olympic gold medals, what are the opportunities that you would give them?” remarked Shields. “If there was a man who was as dominant as me, what kind of opportunities would you give to them? Give the same to me and watch me perform at the highest level possible. Watch me gain fans and be an entertainer and be able to sell tickets and make money. I’m in high demand.”

UFC president Dana White congratulated Shields on Twitter on her performance in Rio. Some have suggested, such as welterweight contender Errol Spence Jr., that Shields would be better off from a financial standpoint joining MMA and ditching boxing, where women have historically struggled to gain a foothold in the industry.

“You never know, he may come in and give me an offer to do MMA,” she said of White. But Shields has little interest in pursuing mixed martial arts, she said. She wants to make her mark as a boxer. “I want to be that pioneer for women’s boxing,” she said. “I want to let other young female boxers know that I can work my way up to 15-0 and I’ll be able to fight on the undercard of a Terence Crawford or an Errol Spence or I can even be the main event over some of these guys.”

Shields’ camp has contacted higher-ups in AIBA to see if female pros will be allowed to compete in the Olympic Games in 2020 and beyond. Her goal is to add two more gold medals to her collection if she can do both. “I would love to go to four Olympics if I possibly could,” commented Shields, who said that AIBA plans to let women fight without headgear in 2017.  “I don’t see anybody beating me at the age of 25. Maybe at 29 when I slow down but I’m only going to get better and I can imagine how strong I will be when I turn 29. I haven’t even really grown into my women’s strength yet.”