Soto Karass vs. Kamegai II: Return of the gatekeepers 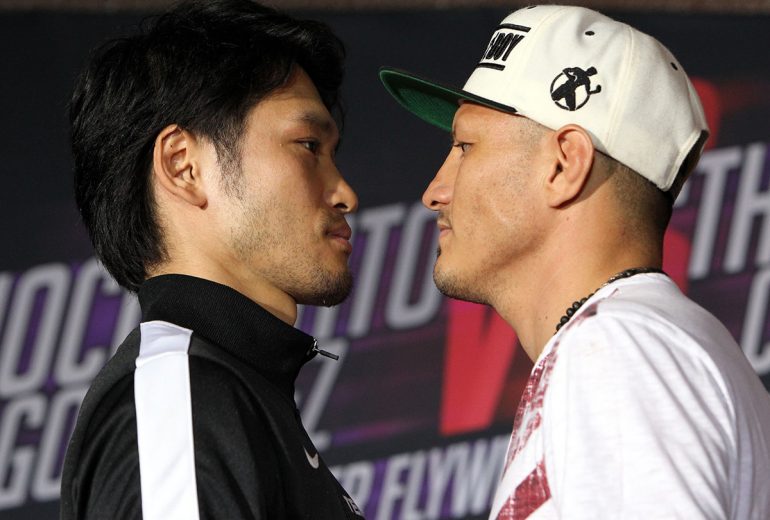 Jesus Soto Karass and Yoshihiro Kamegai know they will never be featured on anyone’s pound-for-pound rankings. They’re aware that they may not be rated in the top 20 of the weight class they currently occupy, junior middleweight.

They accept their status and roles in boxing and don’t profess to be anything more than experienced professionals who are willing to take hard fights. What sets them apart from other veterans is that they’re uncommonly durable and exceptionally tenacious once the bell rings. It’s what makes the 33-year-old sluggers so entertaining and it’s the reason their rematch will be televised live on HBO on Saturday.

Their hardnosed aggression is also the reason I consider Soto Karass and Kamegai to be two of the sport’s most reliable gatekeepers. Both are able to force more talented/athletically gifted/respected opponents into grueling fights. Hence the “gate-keeper” moniker: a fighter has to be the real deal to get past Soto Karass and Kamegai. Gatekeepers separate the prospects from the “suspects” and the contenders from the “pretenders.” They let us know if an up-and-comer has a real future or if a former titleholder’s best days are behind him.

Soto Karass’ upsets over Andre Berto and Selcuk Aydin let us know those two were no longer top-10 welterweights. Kamegai’s 12-round loss to Robert Guerrero let us know that “The Ghost” was likely more of a gatekeeper than a contender.

On April 15, Soto Karass (28-10-4, 18 knockouts) matched his hard head, heavy hands and underrated boxing ability against Kamegai’s iron chin, deceptively fast hands and overlooked body attack. The result was a 10-round Fight-of-the-Year candidate that ended in a split draw. No one who witnessed their fighting spirit dared complain about the verdict.

The first bout took place at the tiny Belasco Theater in Los Angeles, which can hold around 1,500 fans when crammed to capacity as it was on April 15. But the gatekeepers have graduated to the big leagues as their rematch will be in the 17,500-seat Forum in Inglewood, California (and the chief support to the Roman Gonzalez-Carlos Cuadras main event). The expanded audience is in a for a good time as they plan to pick up where they left off.

“I expect the same war with Kamegai,” Soto Karass told RingTV.com through co-manager Sergio Diaz. “I’ve been working on my jab and my boxing for the rematch but that doesn’t mean I won’t be aggressive and take the fight to him.”

Kamegai says he’s ready for whatever Soto Karass brings to the ring on Saturday.

“I don’t know if he’ll come forward and try to make it an inside fight or if he will keep his distance,” Kamegai said through translator Nobu Ikushima of Teiken Promotions, “either way, I’m expecting a lot of punches from him.”

Soto Karass, a 15-year veteran who has been in too many wars to list, says he isn’t thinking beyond Saturday’s rematch. The L.A.-based native of Los Mochis, Mexico is taking it one fight at a time at this stage of his career.

“It would be great if the winner of (our rematch) was offered a title shot or a big money fight, but that’s no longer my motivation to continue boxing,” Soto Karass said. “The fans are my only motivation now. The fans are my family, they’re the ones who give me the motivation to do what I do in the ring. And let me tell you, I need it. The punches we take in that ring aren’t vitamins (laughs).”

Kamegai (26-3-2, 23 KOs) views the rematch differently. He hasn’t given up on his dream to challenge for a world title and he thinks a victory on Saturday can at least push him in that direction.

“I know the importance of winning this rematch,” he said. “I know it will bring me to the next level, and I want to be at the level to do bigger fights.”

When asked what level he believes he’s currently on, he paused before answering.

“That’s a difficult question and the answer to it is a difficult definition,” he said. “Right now, I’m at a level where core boxing fans get excited to watch my fights. That is all.”

Hey, that’s enough for this fight scribe. It was also enough for HBO.

If you read my mailbag column or follow me on Twitter, you know that I love gatekeepers. It’s not just because they serve as a litmus test for the prospective stars of the sport or their willingness to consistently face quality opposition – it’s mainly because they usually make for good fights.

With this in mind, here’s a list of the sport’s top gatekeepers in each division (with some honorable mentions in the heavier weight classes):

Cruiserweight – Ola Afolabi. The London-born L.A. gym legend could not get past Marco Huck (going 0-3-1 in four bouts with the German star) but the veteran remains “Kryptonite” to any 200-pounder that underestimates his ring savvy and sneaky right hand counter, as Rakhim Chakhkiev learned last November.
Honorable mention: Steve Cunningham, Firat Arslan

Light heavyweight – Edwin Rodriguez. Although the former super middleweight title challenger only has two losses on his ledger (his one-sided UD to Andrew Ward in 2013 and his recent third-round KO to Thomas Williams Jr.), it’s evident that his legs and punch resistance aren’t what they were a few years ago, as proven by numerous trips to the canvas in his last two bouts. However, Rodriguez’s power and fighting spirit remains, so “La Bomba” is still dangerous and still makes for good fights.
Honorable mention: Cornelius White, Darnell Boone

Super middleweight – Darnell Boone. “The Godfather of Gatekeepers” (yes, I gave him this moniker) is getting long in the tooth but he’s still a handful for any 168- or 175-pounder looking to make his name (especially if they mistake him for a journeyman by foolishly judging him by his .500 record), just ask 19-1 Canadian standout Schiller Hyppolite, who had to get up from a hard knockdown and survive wobbly moments to sweat out a close decision win in March.
Honorable mention: Christopher Rebrasse, Dashon Johnson

Middleweight – Dashon Johnson. “Fly Boy” is the closest thing to a young Boone out there in terms of difficult style, sneaky power and old-school activity; and like “the Godfather,” up-and-comers and veterans would do well not to judge him by his journeyman-like record. D.J. is dangerous as unbeaten super middleweight prospect Jesse Hart learned in March. Johnson put hands on Hart down the stretch of the fight and had the Philly native down and nearly out in the 10th and final round but had to settle for a close and somewhat controversial loss.
Honorable mention: Paul Mendez, Nick Brinson

Junior welterweight – Mauricio Herrera. The 36-year-old veteran is 4-4 in his last eight bouts but his losses were decisions to Karim Mayfield, Danny Garcia, Jose Benavidez and Frankie Gomez – talented opponents that had a combined 84-0-1 record when he faced them – and many observers believed he deserved the nod against Garcia (the 140-pound champ at the time) and Benavidez. Between his last three losses, he scored decision over solid Johan Perez and Hank Lundy.
Honorable mention: Adrian Granados, Lundy, Mayfield

Lightweight – Art Hovhannisyan. The tough-and-tricky Armenian veteran gave his opponents (Alejandro Perez and Jonathan Maicelo) fits in his only two losses (both by 10-round split decision) and arguably deserved the nod over hard-hitting young fringe contender Fidel Maldonado Jr. in his last fight but had to settle for a draw.
Honorable mention: Argenis Mendez, Marvin Quintero

Featherweight – Fernando Montiel. The three-division beltholder’s first-round KO loss to Jorge Lara in April should’ve signaled the end of his excellent career but if the 37-year-old veteran continues to fight the hunch here is that he can give most 126-pound up-and-comers a run for their money, as he did current titleholder Lee Selby last October.
Honorable mention: Jonathan Oquendo, Tomas Rojas

Bantamweight – Rodrigo Guerrero. The 28-year-old former 115-pound titleholder isn’t as formidable at bantamweight as he was at junior bantie, but he’s good enough beat then-unbeaten up-and-comers Daniel Rojas and Takahiro Shigee in 2104, and go the 12-round distance with rugged British contender Stuart Hall in April. He’s never been stopped.
Honorable mention: Edgar Jimenez

Junior bantamweight – Daniel Lozano. The 26-year-old Floridian has gone from prospect to gatekeeper since being stopped by fellow unbeaten American 115-pound standout Matthew Villaneuva in 2013, but he’s gone the distance against solid opposition since (scoring two knockouts and three competitive decision losses).

Flyweight – Ramon Garcia Hirales. The former 108-pound beltholder and junior fly contender has lost his last four bouts (including a 12-round title bout against Javier Mendoza in 2014) albeit to solid-to-good opposition.

Junior flyweight – Martin Tecuapetla. The unrated 26-year-old scrapper from Guadalajara upset once-beaten contender Gilberto Parra in 2013 and nearly unseated former flyweight champ Akira Yaegashi in May, dropping a split decision to the Japanese veteran in a bid for 108-pound belt.

Strawweight – Jerry Tomogdan. The 22-year-old southpaw is the youngest on this list but has seen a lot of action in only six years as pro. Last January he outpointed unbeaten (8-0-1) prospect Joey Canoy and then went nine rounds with unbeaten (then-37-0) WBC titleholder Wanheng Menayothin in July.