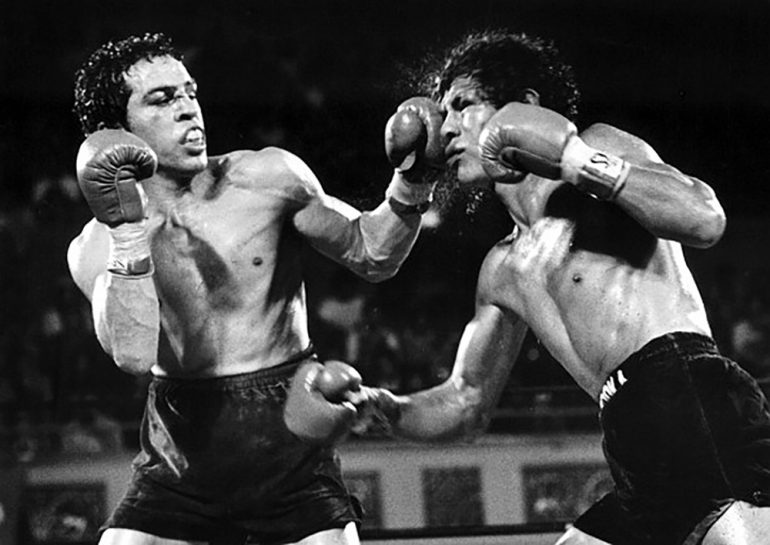 Bobby Chacon (L) goes toe to toe with ring rival Rafael "Bazooka" Limon, who he faced four times. Their fourth match, won by Chacon, was THE RING's Fight of the Year for 1982.
07
Sep
by Mitch Abramson

Bobby Chacon, an action-hero in the ring who suffered tragically in his personal life, died on Wednesday at the age of 64 after struggling with dementia.

Enshrined in the International Boxing Hall of Fame in 2005, Chacon won titles at featherweight and junior lightweight and was regarded as one of the most crowd-pleasing fighters of his era for his battles with Danny “Little Red” Lopez, Ramon “Bazooka” Limon and Cornelius Boza-Edwards.

Dubbed “Schoolboy” by veteran publicist Bill Caplan for his adolescent looks and college background, Chacon first claimed a vacant WBC featherweight title in 1974 with a ninth-round TKO over Alfredo Marcano at the Olympic Auditorium in Los Angeles.

Two fights later he lost the belt to Ruben Olivares in June of 1975 via second-round stoppage. Chacon, who was born in Sylmar and trained in Pacoima, California, eventually won a WBC junior lightweight belt with 15-round unanimous decision win against Limon in December of 1982, rising from two knockdowns to do so in the fourth and final time they would meet.

It was Ring Magazine’s Fight of the Year – the first of two times he would claim the honor; the other was after he won a decision against Edwards in 1983. Chacon challenged Ray Mancini in January of 1984 for a lightweight belt but was stopped in the third round. He won a decision against Freddie Roach in 1985 but eventually retired following a points win against Bobby Jones on June 2 of 1988.

Chacon’s wife, Valerie Chacon, died of a self-inflicted gunshot wound to the head on March 15, 1982, according to a report the next day in the New York Times. She was just 31 and, according to the newspaper, was apparently frustrated because Bobby wouldn’t step away from the ring like she wanted him to. Despite the tragedy, Chacon went through with a scheduled fight with Salvador Ugalde the next day and knocked him out in the third round. Tragedy followed him again in 1991 when Bobby’s 17-year-old son, Bobby Jr. was shot in what the LA Times described at the time as a “gang-related slaying at a Panorama City parking lot.” He finished his career with a record of 58-7-1 with 47 knockouts.