Eric Gomez is promoted to president 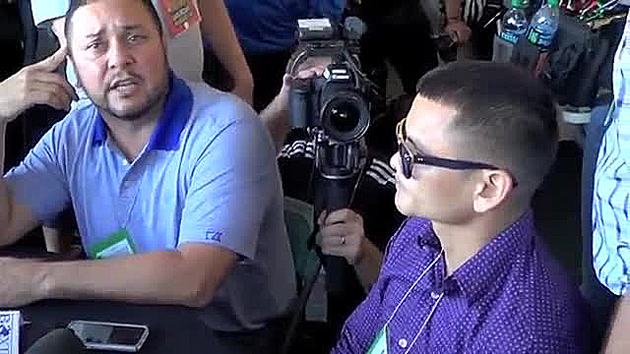 Eric Gomez, the hard-working senior vice president of Golden Boy Promotions, who often acted as a conduit to the media and whose role increased as the company underwent changes in recent years, has been promoted to the position of president, Golden Boy chairman Oscar De La Hoya announced on Wednesday.

Gomez will be tasked with overseeing the day-to-date operations of the company on all boxing-related matters; De La Hoya’s role will remain unchanged. He will continue to run all Golden Boy entities including Golden Boy Media and Entertainment; Golden Boy Productions; the Oscar De La Hoya Foundation; Golden Boy’s interest in the Houston Dynamo; and all other real estate and business interests.

Gomez’s first big test in his new role will be to help oversee flagship fighter Canelo Alvarez’s junior middleweight title fight with Liam Smith on Sept. 17 on HBO PPV at AT&T Stadium. “I have spent my entire life around boxing,” Gomez said in a press release. “To have the opportunity to become president of the world’s greatest promotional company is truly an honor. From our super-talented fighters to our incredible staff, Golden Boy has always felt like a family, and I look forward to working with this amazing team for years to come.”

Gomez is a boyhood friend of De La Hoya’s, and has worked with him in a number of capacities, including his first job at Golden Boy as a matchmaker. His role took on more significance after former CEO Richard Schaefer stepped down in 2014 after a fissure in his business relationship with De La Hoya.

“Eric has been a trusted advisor, confidante and friend throughout my career both as a fighter and a promoter,” De La Hoya said in the release. “From close relationships with our fighters, to sharp insight into the business of the sport, to an ability to manage a growing team of professionals, there is no one in the sport who has a better or broader view of boxing.”