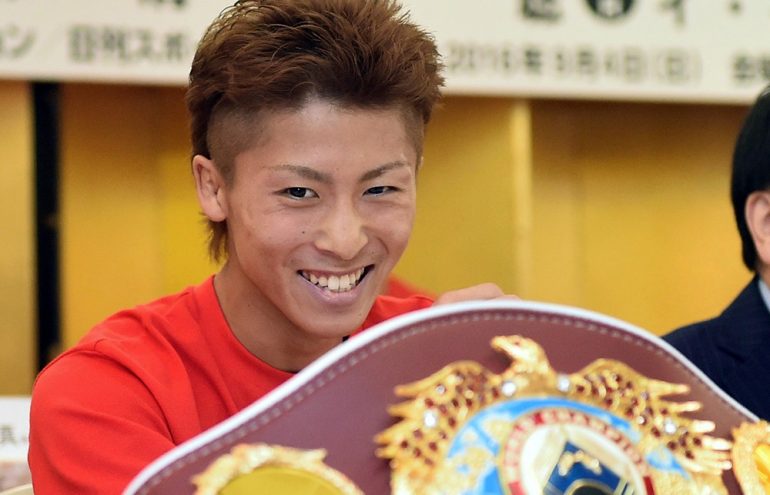 Naoya Inoue at the press conference for his upcoming title defense. Photo by Naoki Fukuda
02
Sep
by Anson Wainwright

Here are 12 things you may not know about Japanese phenom Naoya Inoue, who makes the third defense of his WBO 115-pound title on Sunday.

The wunderkind first sprang to people’s attention when he won the WBC 108-pound strap in just his sixth pro outing. After one successful defense, Inoue (10-0, 8 knockouts) made the bold move to skip the flyweight division and face Omar Narvaez, the consensus No. 1-rated 115-pounder in the world, emphatically beating the long-reigning Argentinean champion in two brisk rounds.

A career-threatening injury meant Inoue was on the sidelines for a year. Since returning, he has made two successful defenses.

Here are 12 things you may not know him (in his words):

1. When I was in Kindergarten, I played soccer.

2. Last December, I got married. (My spouse and I) had been together since high school. I hope to have three children; however, I don’t know whether I will let them box.

3. I do not have any certain religion as many Japanese people do.

5. I love watching movies of any genre. My favorite is Disney’s “Aladdin.”

6. I love any Disneyland parks and their attractions. My favorite ride is “Space Mountain.”

7. I sincerely thank and respect my parents for helping me prepare and take up boxing.

8. I loved playing outdoors when I was a child, especially playing with friends from my school.

9. I have no detailed idea on my life after I retire from boxing.

12. My goal in boxing is to win many world championships in different weight classes and keep them as long as possible.