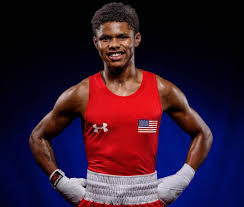 Shakur Stevenson had dinner with Floyd Mayweather Jr. in Rio at the Olympic Games and was honored when Mayweather called him the sport’s next version of him.

Though he was impressed by Mayweather’s presence and words, Stevenson has yet to sign with a promoter or manager. “I definitely haven’t made my decision yet,” Stevenson told RingTV.com on Friday. “I’m still up for grabs.”

But Stevenson said the meeting with Mayweather left a strong impression on him, and he will consider their time together when he eventually starts the process of picking a promoter, which he said hasn’t started yet. “Yeah, most definitely,” Stevenson said in a phone interview. “I guess he’s trying to put the work in to come out here and show he actually cares and he wants to see the talent up close. Yeah, it makes a difference.”

After winning silver with a razor-thin loss to Cuba’s Robeisy Ramirez in the bantamweight final, Stevenson has emerged as one of the breakout stars of the Games, his ubiquitous smile and charm on display. His skilled effort and emotional interview after the loss showed his competitive drive, leaving many to predict big things for the 19-year-old from Newark, New Jersey.

So it’s no surprise that Stevenson says he has been courted by many of the sport’s biggest promoters, such as Golden Boy, Top Rank, Roc Nation Sports and Mayweather Promotions. He claims the process is totally open and a favorite hasn’t emerged yet.

“I don’t really have no promoter that I’m strongly considering right now,” he admitted. “I haven’t made any contact with any, so I can’t really tell you what’s the best offer. I have to wait until I see what people are offering. I haven’t really seen anything yet but I’ve heard certain (promoters) have been trying to hit me up. Golden Boy has definitely been one of them. Top Rank. I guess we have to see.”

Stevenson mentioned January of 2017 as a target date for when he hopes to turn pro. He will campaign as a featherweight. “I’d rather fight at that weight,” he said. “There are top dogs at that weight. Leo Santa Cruz, Gary Russell, Lee Selby — I want to challenge those guys when the time is right.”

Mayweather, who didn’t try to sign him in Rio, was the only promoter to meet him there, says Stevenson. He’s also friendly with former U.S. gold medalist Andre Ward, who is signed to Roc Nation. Still, Stevenson said that Ward hasn’t lobbied him on the benefits of Jay Z’s firm and has just dispensed advice inside the ropes. The thought of whittling down a list of promoters to one is a side of the sport he hasn’t really embraced yet.

“I’m not really excited about that,” he said. “I’m more excited about my pro debut and getting a chance to become one of the greats. I’m excited for the next chapter of my life.” When he does sign, Stevenson wants the promoter  to eventually let him fight back home in Newark at the Prudential Center.

The city is throwing him a parade on Sunday at noon, starting at Military Park and heading to City Hall for a Key to the City presentation from Mayor Ras Baraka at 1 p.m. “I just want to do a few fights for my fans from Newark,” he said. He plans to take the next month off to get his driver’s license and reflect on what he accomplished in Rio.

He’s still upset on losing the Olympic final but is heartened by the thought of some pretty good fighters who failed to win gold and more than made up for it in the pros. “I’m looking forward to turning pro and trying to become one of the greats,” he went on. “If you look at a lot of fighters, like Roy Jones only got silver and Floyd Mayweather had bronze. So I know I can get to their level. I’m trying to focus on that now.”