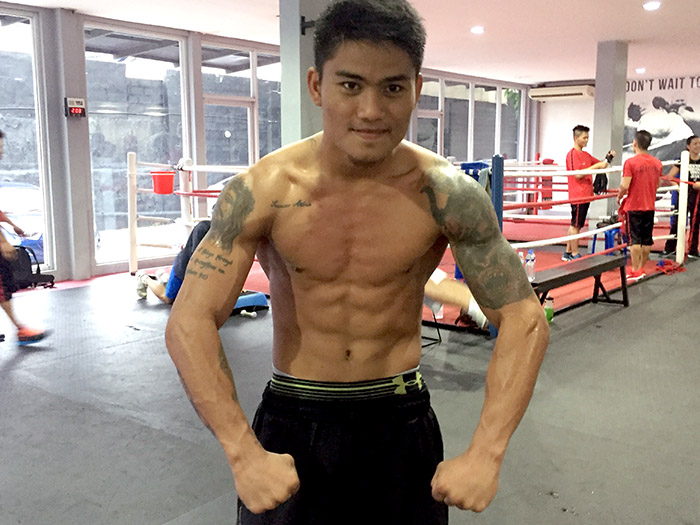 MANILA, Philippines – Unbeaten Filipino featherweight Mark Magsayo is hoping to show off improved defense and a more clinical boxing approach when he faces Ruben Garcia in a 12-round fight on Sept. 24 at the StubHub Center in Carson, California.

Magsayo (14-0, 11 knockouts) is coming off one of the most thrilling fights of 2016, a six-round war with Chris Avalos in April on the undercard of Nonito Donaire’s third-round knockout of Zsolt Bedak in Cebu City, Philippines. Magsayo was knocked down for the first time in his life in Round 3 but survived to stop Avalos on his feet in Round 6.

The fight confirmed to promoter ALA Boxing and trainer Edito Villamor that the 21-year-old from Tagbilaran City has heart, but is in desperate need of effective defense.

“He needs to work on his defense … sometimes he’s careless,” says Villamor. “ He throws a lot of punches but he doesn’t look for the punches coming back.”

It’s a point which Magsayo says he learned the hard way when he was dropped by a left hook and appeared to be finished before staging his comeback for the win.

“The defense is very important,” says the WBO’s ninth-ranked featherweight. Still, Magsayo acknowledges he is a fighter by nature, and is intent on fighting the style which has made him a popular attraction in the Philippines.

“I’m an action fighter like Manny Pacquiao. I get knocked down, I get up. I fight like a warrior,” Magsayo says.

In Garcia, Magsayo will face an opponent who has gone rounds with fighters with good records but who has come up short in meaningful fights.

The 23-year-old Garcia (17-2-1, 7 KOs) lost a decision to unbeaten prospect Rafael Rivera last October and was stopped in the seventh by former IBF bantamweight titleholder Randy Caballero this past February. He has since won two fights in the Dominican Republic against record-filler opposition.

The fight will be Magsayo’s second in the United States. In his first outing, he knocked out Yardley Suarez in two minutes in October 2015.

Magsayo is currently in Los Angeles along with current 108-pound RING champion Donnie Nietes, who will face Edgar Sosa in the flyweight main event, plus Arthur Villanueva, who will face Juan Jimenez in a rematch of their fight this past May when Villanueva got off the deck to knock out Jimenez with a headbutt.

The trio began sparring on Wednesday with four-round sessions under the supervision of Freddie Roach and will do conditioning work with Nick Curson.