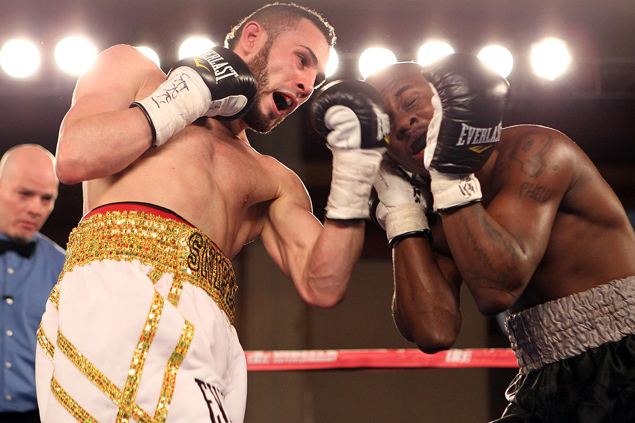 After 12 professional fights, Tevin Farmer had come to a crossroads in his career.

The Philadelphia product had just been stopped by future world titleholder Jose Pedraza and, with a record of 7-4-1, he looked like just another fighter.

However, in less than four years, Farmer has turned his career completely around and is knocking on the door to becoming a serious player in the junior lightweight division. Since the Pedraza fight, in October of 2012, Farmer (21-4-1, 5 KOs) has won 14 bouts in succession. Three of those opponents were unbeaten and his latest victim, Gamaliel Diaz, was a former world titleholder.

This Saturday, he faces former world title challenger Ivan Redkach in a 10-round bout at the Barclays Center in Brooklyn, New York. On paper, Farmer faces a stern challenge, despite the fact that Redkach is 1-1-1 in his last three and was dropped in two of those fights.

“This is a big opportunity for me and I’m facing a good opponent,” Farmer told RingTV.com on Wednesday. “(Redkach) is definitely facing someone who’s going to bring it. I’m not going to make anything easy for him.”

“I have way more experience and I’ve faced the better competition,” said Farmer who, at 25 years old, is five years younger than Redkach. “I’ve faced more adversity, in and out of the ring.

“The guys he has fought are not at my level. I’ve stepped up my level of opposition in my last 14 fights and I’ve schooled them all. I already know he’s weak-minded. He’s shown weaknesses in his fights and I know when you fight back, that breaks his will. He freezes.”

According to Farmer, he was very fortunate to get the fight against Diaz on Mar. 30. because his previous bout was against former world title challenger Daulis Prescott, way back in August.

“I was off for eight months after the Prescott fight. I was begging to get back in the ring. I felt the (ring) rust when I fought on Mar. 30, but I was happy to get those 10 rounds in.”

Farmer has become more well-known outside of Philadelphia. He has created a following amongst hard-core boxing fans, due largely to his fighting style and he relishes the role of the underdog.

While a win on Saturday opens more doors for Farmer, he also believes in entertainment.

“I’m a crowd-pleaser. I’m an entertaining fighter,” he said. “I know real boxing fans follow me, but I want to make more fans and that’s what I intend to do in Brooklyn.

“I’m ranked. What else do I have to prove to those who doubt me? I’m ready to fight for a world title and compete to be the best in my division.”

Farmer vs. Redkach will air on Showtime Extreme, beginning at 7 p.m. ET/ PT.

Francisco A. Salazar has written for RingTV since October of 2013 and has covered boxing in Southern California and abroad since 2000. Francisco also covers boxing for the Ventura County (CA) Star newspaper, RingTV, and Knockout Nation. He can be reached by email at [email protected] or on Twitter @FSalazarBoxing