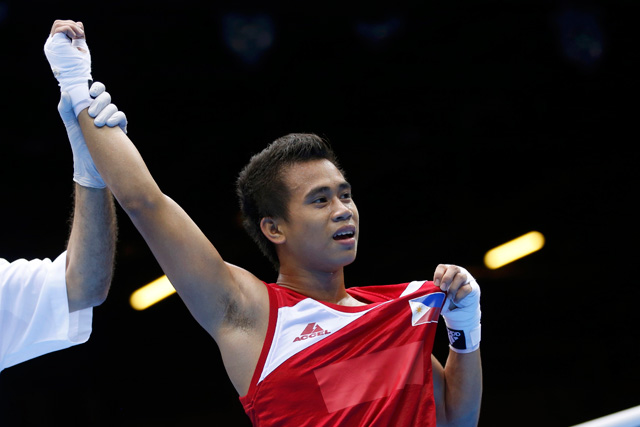 MANILA, Philippines – In little over a week, the Olympic boxers will take the ring in Rio de Janeiro with the dreams of gold becoming more vivid with each passing night.

Mark Anthony Barriga knows that feeling, of fighting with an elevated purpose, not for a purse but for flag and country. In 2012, he was the Philippines’ lone boxer at the London Games and, by connection, their best medal bet as five of the country’s nine total Olympic medals have come from boxing.

The light flyweight Barriga made it past his first fight against an Italian foe but lost by a point to a Kazakh competitor in his second bout. It was thought then that the 19-year-old would be a bigger threat for 2016 with more experience and physical maturity.

However, after Rogen Ladon qualified for Rio in his weight class, Barriga elected to put those hopes in the past and work toward the next item on his bucket list: a pro title.

Barriga is preparing for his pro debut, which takes place Saturday, July 30 at Robinson’s Galleria in Cebu City, Philippines. Barriga will face Melvin Manangquil, a 19-year-old with a 1-1-2 (1 knockout) record, in a six-round fight with a contract weight of 108 pounds.

According to Barriga, this had been his goal all along.

“After the Olympics in 2012, I dreamed to be a professional. I should have been a professional a long time ago but the (national team) coaches there stopped me, saying, ‘Stay here for now; you need other techniques before turning pro,’” said Barriga, now 23, who has signed with manager Jason Soong and is being trained now by Joven Jimenez.

Barriga’s venture to the pros is uncommon among top amateurs in the Philippines, many of whom prefer to stay with the national team and are comfortable with their government stipends.

The last Philippine Olympian to turn pro was Danilo Lerio from the 2000 class.

For Barriga, his journey to boxing started as a young boy growing up in Davao del Norte, Philippines. Nicknamed “Bulilit,” or “short guy,” due to his diminutive 5-foot-2 stature, he was frequently targeted by bullies who first sought to harm him, then to discourage him.

“When the time came that they knew I was boxing, they kept on bullying, saying that I was small or that I wouldn’t be famous. I proved them wrong. So I persevered, trained hard. I reached the national team until I became an Olympian. All the bullying to me was invalidated because of what I have done.”

Barriga did well in boxing, starting at 5 years old and amassing over 100 fights. (He doesn’t know the exact figure.) He impressed at the 2011 Worlds, upsetting two-time Olympic bronze medalist Paddy Barnes before losing to eventual gold medalist Zou Shiming, then won gold at the 2013 Southeast Asian Games and took bronze at the 2014 Asian Games. At his peak, he was ranked No. 2 in the world.

Boxing helped him outside the ring as well. He earned a scholarship to University of Mindanao Panabo College and was on track to graduate with a Bachelor of Science in Commerce – Marketing Management in April but time spent focusing on training took him away from his studies.

“I regretted that a bit too because I should’ve graduated by now. That’s the only thing no one can get from me, my studies,” said Barriga.

Barriga also spent three years serving in the Philippine Air Force, rising to the rank of A2C, or an Airman Second Class, but had to file for a discharge to turn pro.

“I do miss it,” Barriga says of his time in the military. “To tell you the truth, it’s lifetime work, being part of the AFP (Armed Forces of the Philippines). But of course, I need to sacrifice that for my dreams,” said Barriga.

“I…smoothed out my departure so, in case my run here doesn’t go well, I could return there.”

It was a gamble but one Soong believes will pay off soon. He sees Barriga stepping up in class quickly with a world title shot coming shortly.

“We’re gonna go for five fights,” said Soong, whose other boxers include Aston Palicte and Lolito Sonsona. “We’re gonna base it after Vasyl Lomachenko. What we told the (Games and Amusement Board) was this guy (Lomachenko) did this so we can do it also.”

The promoter for Saturday’s show – the Cebu-based Omega Pro Sports International (OPSI) – is happy for the added attention that Barriga’s pro debut brings to the card, which will be headlined by junior featherweights Jack Tepora (17-0, 12 KOs) and Bryan Capangpangan (10-2-1, 7 KOs) in a 10-round fight and is free to the public.

“We are definitely proud to have a fighter and an Olympian, at that, in Mark to be featured on our show,” said OPSI Vice President Chad Canares.

Barriga is already learning how uncertain the pro game can be after his original opponent for a June 24 debut failed a medical exam. But Barriga is content to have Soong handle the dangers of business outside the ring.

As for the dangers inside the ring? He’ll cross that bridge when he gets there.

“I’m so ready because I’ve already tried fighting without headgear and with stronger boxers,” said Barriga.