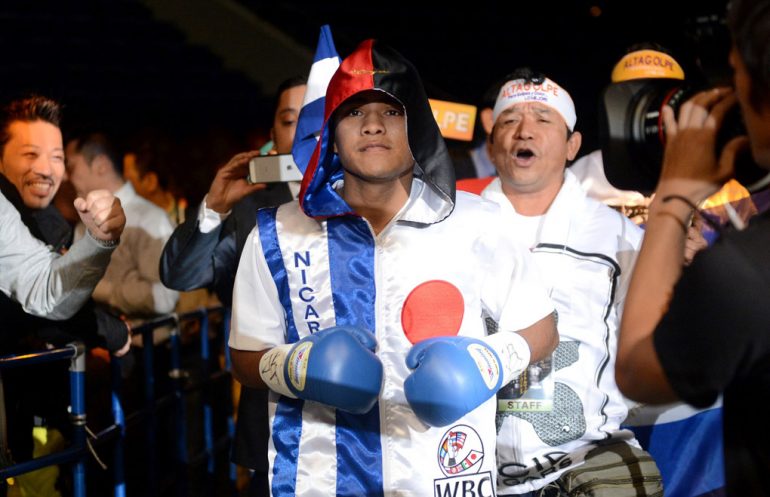 On Sept. 10 some fans will take to social media to rip middleweight star Gennady Golovkin for defending his world titles against welterweight beltholder Kell Brook. Other fans will come to GGG’s defense by ripping Canelo Alvarez for fighting junior middleweight beltholder Liam Smith on Sept. 17 instead of defending his RING/lineal titles against Golovkin.

The smart fans – and the real ones – won’t have time for that nonsense. They will be too busy anticipating RING/WBC flyweight champ Roman Gonzalez’s challenge to 115-pound titleholder Carlos Cuadras, which takes place at The Forum in Inglewood, California, on the same night Golvokin-Brook goes down at O2 Arena in London.

HBO will televise Golovkin-Brook live in the afternoon on Sept. 10, and then replay the UK fight as the lead-in for a live (10:00 p.m. PT/ET) Championship Boxing doubleheader featuring the Jesus Soto Karass-Yoshihiro Kamegai rematch and the Gonzalez-Cuadras showdown.

For boxing fans that pay attention to the lighter-weight classes and don’t discriminate against action fighters with losses the doubleheader is as good as it gets, and Cuadras was as giddy as the geekiest of hardcore heads at Monday’s press conference at The Forum.

“Without a doubt this is the biggest fight of my career,” Cuadras (35-0-1, 27 knockouts), the 27-year-old WBC super flyweight beltholder from Sinaloa, Mexico, said through veteran interpreter Ricardo Jimenez. “I’ve known Gonzalez for a few years now, we have the same promoter, Teiken Promotions, so we’re stablemates, we’re friends, but I’ve also wanted to test myself against him.”

Gonzalez (45-0, 38 KOs), a 29-year-old three-division titleholder from Nicaragua, is widely regarded as the best fighter, pound for pound, on the planet.

The relentless boxer-puncher admits to being friendly and familiar with Cuadras but says he never thought much about fighting THE RINGs No. 2-rated junior bantamweight. Now that Gonzalez will face Cuadras, he’s done his homework.

“I have seen a lot of video of Carlos,” Gonzalez told RingTV.com through manager Carlos Blandon, “he’s a boxer that moves a lot and can punch while in reverse.”

Gonzalez, who is 15-0 in world title bouts, has faced and conquered a variety of styles. He had a difficult style in front of him in his last outing, former amateur star and title challenger McWilliams Arroyo, who he outpointed over 12 rounds in front of a sold-out crowd of 16,353 at The Forum. The fight, which was the co-feature to Golovkin-Dominic Wade, averaged 1,001,000 viewers on HBO and helped set up his headliner on Sept. 10.

The humble and soft-spoken Nicaraguan is nearly speechless when asked if he ever thought he would be a main event fighter on HBO in the U.S.

“Wow, all I can say is that I’m super happy and grateful to (co-promoters) K2, Teiken and HBO for making a fight worthy of a main event,” he said. “I never thought that I’d be in this position. The effort I’ve put into my training and career for years is now starting to pay off.”

If Gonzalez beats Cuadras he will be the first boxer from Nicaragua to win titles in four weight classes, a goal that his late, great mentor Alexis Arguello fell short of achieving. If Gonzalez achieves it more than a few fans and boxing pundits will consider “Chocolatito” to be a hall-of-fame lock.

However, Cuadras, who has defended his title six times against solid opposition in just two years, fighting in Mexico, Japan and the U.S., wants the American fans watching him for the first time on HBO to know that he’s no slouch.

“Hey! Watch me!” he yelled in English before and during the presser. “I’m strong, I’m fast and I’m very, very handsome!”

Cuadras has the same kind of plucky good natured personality as his countryman, Soto Karass, who will make only his second appearance on HBO in a wayward 15-year pro career during which he’s taken on a Who’s Who of welterweight standouts such as Marcos Maidana, Keith Thurman, Devon Alexander, Andre Berto, Vince Phillips, Alfonso Gomez, Selcuk Aydin, Mike Jones, David Estrada and Carson Jones. And being the reliable gatekeeper that he is, he gave them all hard fights and upset a few of them.

On April 15, Soto Karass (28-10-4, 18 KOs) faced a fellow hardnosed offense-minded gatekeeper in Yoshihiro Kamegai at The Belasco Theater in downtown Los Angeles. The two volume punchers combined to make for one of the best fights of 2016 for 10 hotly contested rounds. After emptying their tanks, the estrellaTV/RingTVLive-broadcast bout ended in a split draw. Hardcore fans began clamoring for a rematch before either fighter left the ring.

Soto Karass knew the return bout would happen and made sure not to get too out of shape between bouts (which happens to be a bad habit of his).

“I realize now, late in my career, the importance of staying prepared between bouts,” he continued with the help of Golden Boy Promotions matchmaker Robert Diaz assisting with translation.

Soto Karass expected a hard fight from Kamegai (26-3-2, 23 KOs), who’s known for giving tough guys hell, but the Japanese banger showed him some wrinkles in the first bout that he wants to be ready for on Sept. 10.

“I had a kamikaze in front of me on April 15, I wasn’t surprised he was so tough, but where he did surprise me is with his body shots because he was landing his left behind my elbows and getting to my kidneys,” Soto Karass said. “That’s the only time he hurt me is when he landed there. I was prepared to block a liver shot, but he caught me in my kidneys and those punches did do some damage. I give him credit, he did it well, but technically, punches there are illegal.”

Does he plan to counter illegal body shots with forbidden punches of his own in the rematch? Not at all, the only thing Soto Karass plans to add to his arsenal is boxing’s most basic punch, and it’s very legal.

“After the first fight Oscar (De La Hoya) told me ‘Why didn’t you use your jab more?’” Soto Karass said. “I know I can box a technical fight but I want to fight in a way that pleases the fans. Still, it probably would have helped me to work my jab.

“For this fight I’m going to do the same thing I did in the first bout but with the jab and a little more technique.”

If you’re a blood-thirsty ghoul who wants Soto Karass and Kamegai, who wasn’t at Monday’s press conference, to exhibit more of the savage science than the sweet science, don’t worry, the 32-year-old native of Los Mochis, Mexico wants to put it on his Japanese rival with the same volume he did on April 15.

Soto Karass averaged 113 punches per round against Kamegai, who averaged 75 punches per round (and the sluggers nearly doubled the junior middleweight average for punches landed in a round). He somehow threw a CompuBox record of 168 punches in Round 10.

“To be honest, I was surprised that I threw that many punches,” Soto Karass said. “I’m towards the end of my career, but those kinds of numbers are encouraging, it lets me know and fans know that ‘JSK’ will be around for a while longer.”

As long as the Los Angeles-based veteran continues to put on fights like the Kamegai battle, he will be welcomed on HBO, says network executive Peter Nelson, as are Gonzalez and Cuadras.

The HBO Sports executive vice president thanked the media for taking notice of special fighters, such as the trio that was present at the press conference.

“Gonzalez has a great record but he earned his ‘O,’ he was willing to put it on the line against worthy opponents,” Nelson said. “There are different ways of building an undefeated record in boxing. We all know there are matchmakers in this room that could get my older sister to 20-0. But Gonzalez and Cuadras earned their undefeated records because they’re willing to fight tough fights.

“That’s why we don’t care about the number of losses that Soto Karass and Kamegai have because it’s about the quality of who they’ve fought.”