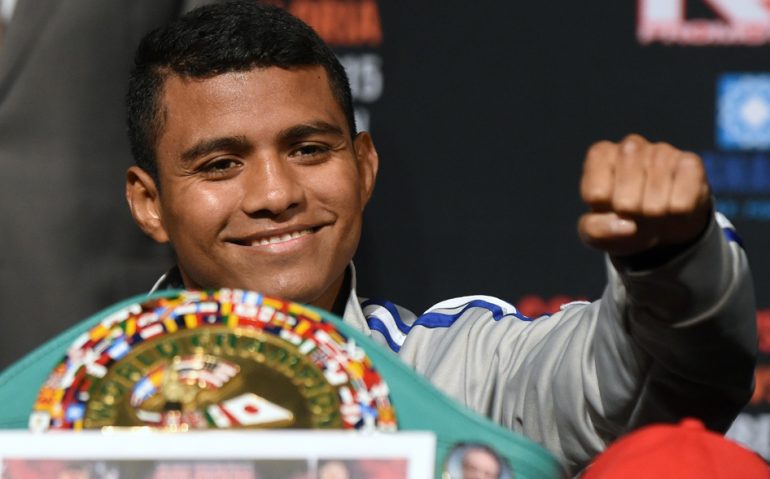 Roman “Chocolatito” Gonzalez hopes to clean out the junior bantamweight division and then possibly move up to 118 pounds before he calls it quits in his career at age 35, Gonzalez told RingTV.com on Monday of his overall plans in the sport.

Gonzalez (45-0, 38 knockouts) is gunning for a world title in a fourth weight division when he faces undefeated junior bantamweight titleholder Carlos Cuadras (35-0-1, 27 KOs) on Sept. 10 at The Forum in Inglewood, California on HBO.  That may not be enough for the Pound-for-Pound King, who will surpass his idol and mentor Alexis Arguello with a fourth championship against Cuadras.

A title in a fifth division could also be in his future. “Maybe I could make a move to 118,” Gonzalez said through manager/translator Carlos Blandon. “Only God knows, but I think 118 is the most I would go.”

The move to 118 pounds would come naturally and gradually for the 29-year-old dynamo.  “This is something that we always analyze,” Blandon said. “There’s no pressure or anything, so we don’t feel we’re ready to pressure his body to go up to 118. So we’re going to let him develop himself at 115. And then naturally when his body feels it’s ready to go up, we’ll analyze that. But for now it’s just one step at a time. We’ll definitely stay at 115 for a while.”

Gonzalez would like to test his skills against WBO junior bantamweight titleholder Naoya Inoue (10-0, 8 KOs), THE RING’s top-rated fighter at 115 pounds. Cuadras is rated No. 2. “He’s a great champion,” Gonzalez said of the Japanese boxer. “I respect him very much. He’s a fighter that I would like to face in the future. I believe that would be an excellent fight.”

Gonzalez-Cuadras is part of an HBO split-site broadcast with unified middleweight champion Gennady Golovkin, who is taking on Kell Brook in London earlier in the day. Yoshihiro Kamegai and Jesus Soto-Karass will serve as the HBO co-feature at The Forum.

Gonzalez said he could always revisit 112 pounds after his fight with Cuadras if the right opportunity comes up. “I could fight at 112 in the future,” he said. “But I definitely feel very happy that I have the opportunity at 115 for a fourth title.”