Spence Jr. believes Brook will vacate after getting KO’d by Golovkin 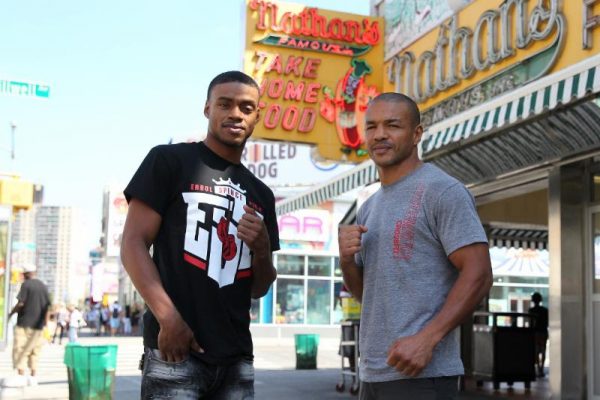 Errol Spence Jr. has an idea of how his IBF welterweight title fight will eventually play out.

Spence believes that Kell Brook may have to vacate or be stripped of his IBF title after getting knocked out or at least battered in his fight with Gennady Golovkin on Sept. 10. As a result, he will be unable to fight his mandatory in time.

“I expect him to either vacate or they strip him,” Spence told RingTV.com on Thursday. “Because he has to fight GGG and it’s not going to be an easy fight at all. So I don’t see him coming back three months later or five months later. Hopefully, he vacates or they strip him if he gets stopped or something and he has to sit out three or four months. A lot of guys at that top level they don’t fight in three and four-month spans,” Spence added.

Of course, Spence (20-0, 17 knockouts) has his own fight to worry about. He faces Leonard Bundu (33-1-2, 12 KOs) on Sunday at the Ford Amphitheater at Coney Island Boardwalk in Brooklyn in a PBC on NBC (5 p.m. ET) broadcast. Spence-Bundu is a world title eliminator for the right to vie for the IBF title. Brook is facing Golovkin in London next month at 160 pounds and there’s speculation he may drop down to junior middleweight after the fight regardless of the result.

Brook further fueled such rumors when he tipped the scales at 176 pounds during the 30-day mandatory weigh-in exercise by the WBC. Spence and Bundu didn’t have any issues with weight on Saturday. Both weighed in at 146.2 pounds for their welterweight fight.

Spence is quiet but confident about his abilities. Out of all the talented welterweights in the division, he said Brook would likely present the biggest challenge. “I thought Kell Brook was going to be a difficult fight,” he told RingTV.com. “That would have been a great fight. Keith Thurman- he’ll be a tough fight. I always say Keith Thurman is a good fighter. He can fight. That would be a good fight. Of course Danny Garcia would be a good fight. There are a lot of good fights there.”