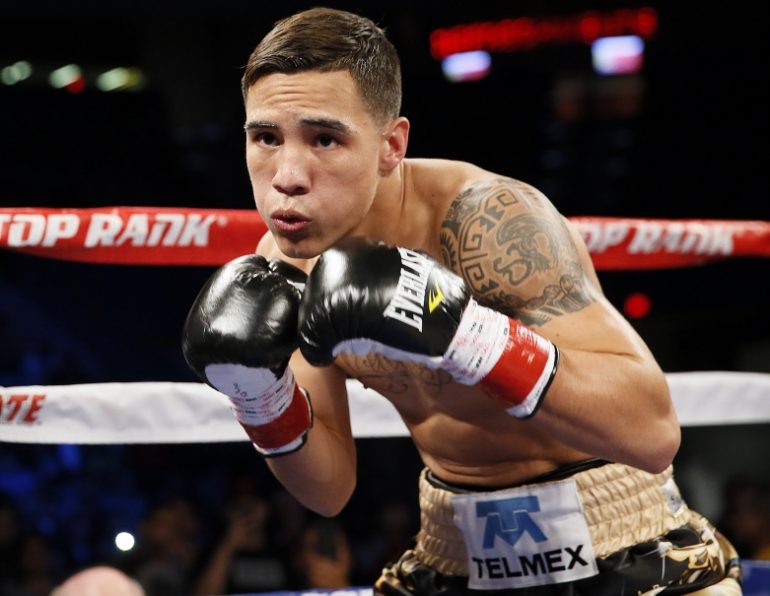 Featherweight standout Oscar Valdez won his first major world title with a second-round stoppage of unbeaten but unheralded Matias Rueda on the undercard of the Terence Crawford-Vikotor Postol fight on Saturday in Las Vegas.

Valdez (20-0, 18 knockouts), a 25-year-old two-time Mexican Olympian, picked up the vacant WBO belt with his brutally one-sided demolition of Rueda (26-1, 23 KOs), a 28-year-old Argentine fighter making only his second appearance in the U.S. Valdez, who trains in Southern California, battered Rueda’s face with head-swiveling hooks and crosses before switching his attack to the body, which produced instant knockdowns.

Referee Russell Mora waved the fight off after the second body knockdown.

Also on the Crawford-Postol undercard, and part of the HBO Pay Per View broadcast, former 140-pound beltholder Jose Benavidez Jr. remained unbeaten with a hard-fought 10-round unanimous decision over veteran gatekeeper Francisco Santana. Benavidez (25-0, 16 KOs), a 24-year-old Arizona-based boxer-puncher, buzzed Santana early, withstood the Santa Barbara, California native’s relentless pressure and body punches in the middle rounds, and then rallied in the final two rounds to earn what most observers thought would be a razor-thin decision, or even a draw.

However, Benavidez was awarded every round by judge Adalaide Byrd and won 98-92 on Glenn Fledman’s scorecard. Only Kermit Bayless’s score of 96-94 seemed to reflect the action that took place in the ring.