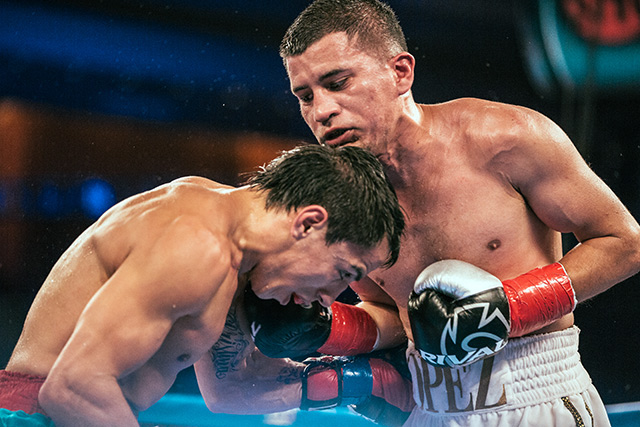 Junior featherweights Adam Lopez and Roman Reynoso fought to a 10-round draw in the main event of the 15-year anniversary telecast of ShoBox: The New Generation on Friday at Foxwoods Resort Casino in Mashantucket, Connecticut.

In attendance ringside before the fight, newly crowned IBF junior featherweight titleholder Jonathan Guzman announced that he’d like fight the winner of Lopez-Reynoso, raising the stakes for this matchup of 122-pound prospects. While the fight was close and entertaining, analyst Steve Farhood, who has called all 219 ShoBox telecasts, didn’t believe either fighter did enough to earn an immediate title shot against Guzman.

The fight looked like a toss-up heading into the 10th – with Lopez leading by just one connect after nine rounds – and the Ronnie Shields pupil came up with a huge final round rally. The undefeated prospect hurt Reynoso (18-1-2, 7 KOs) in the final seconds with a flurry of shots, forcing the Argentine spit out his mouthpiece to buy himself nearly 30 seconds of rest. Seemingly out on his feet, Reynoso somehow survived the onslaught without falling to the canvas before the final bell. Lopez (15-0-1, 7 KOs) out-landed Reynoso 34-21 overall and 34-20 in power shots in the final round, but it wasn’t enough to earn him the victory.

Judge Don Ackerman saw Lopez a 96-94 winner, while Bill Morande had it 97-93 Reynoso, and Peter Hary cast the deciding ballot at 95-95. All three judges scored the last round 10-9 for Lopez. Had Reynoso fell to the canvas in the final seconds, the 10-8 round would have given Lopez the win.

“It was a tough fight. He didn’t want to engage,” said Lopez, who out-landed Reynoso 158-144 overall and 131-125 in power shots. “He’s slick and experienced and a good fighter. I feel that this was my best performance on ShoBox. I have been working on new things with Ronnie Shields and it showed in there. I know I hurt him in the last round.

“The decision was bulls__t. He could not hit me.”

“It was a close fight, but I feel I won,” Reynoso said. “He never hurt me. The only thing that surprised me is that he was more aggressive than in other fights. I hurt my hand from hitting him.”

Late replacement Jerry Odom knocked out previously once-beaten Julius Jackson with a vicious third round knockout (1:57) in the ShoBox co-feature.

Jackson (19-2, 15 KOs), the son of former two-division world champion Julian “The Hawk” Jackson, was outworking Odom through two rounds, who took the fight 10-days notice after Ronaldo Ellis suffered a hand injury. That was until Washington, D.C.’s Odom (14-2-1, 13 KOs) clocked Jackson with a flush right counter shot with one minute left in the third, spelling the end for Jackson, who couldn’t beat the count and suffered his second consecutive knockout loss.

“I saw the right hand. I was throwing combinations and I saw the opening and landed a good shot,” Odom said. “As opposed to the last couple fights, I am in a great place physically, mentally and spiritually. I have a great team around me. We are unbreakable.”

“He threw the punch at the right time and caught me,” Jackson said. “I was OK, but the referee stopped the fight. I felt up until that point, I was boxing well and winning every round.”

Chinea (13-1-1, 6 KOs) was the aggressor, dictating the tempo of the fight from the outset. And while most rounds were extremely close – closer than the relatively wide scorecards – Chinea’s activity was the difference. Chinea threw 733 total punches, compared to 641 for Foster, and he edged Foster by nearly 150 power punches (592-449).

“He is a hell of a fighter and it was fun to fight him,” said Chinea, who was largely able to minimize the jab, Foster’s best weapon. “Like I said before the fight, he could not take pressure. I brought the pressure. I blocked and slipped a lot of his punches. My will and desire to win outweighed his will to punch.

“He did not take my pressure well. I worked my shots well inside and that was a difference in the fight.”

Foster, who’s record fell to 10-2 with 7 KOs, complained that he “had distractions and couldn’t focus.”

In the opening bout of the telecast, Ian Green handed previously undefeated super welterweight prospect Khiary Gray the first loss of his career with a stunning second round TKO (2:50).

With former world champion and fellow Paterson, N.J., Kendall Holt in his corner, Green (10-1, 8 KOs) came from behind to floor Gray with a big right cross to the chin that sent him tumbling face-forward into the canvas. Gray, a local favorite from nearby Worchester, Mass., tried to hold on with just 30 seconds left in the round, but he couldn’t make it to the break and was falling backward into the ropes when the referee halted the contest.

“I got him good, and I got him out of there,” said Green, who out-landed Gray 14-0 in the final minute. “He got me good one time, but I kept my left hand up and hung in there. We’re going all the way up. This is just the start.”

Gray (13-1, 10 KOs), who was seemingly in control of the fight and rocking Green with ease, became the 151st fighter to suffer his initial defeat on the prospect developmental series.

“He just caught me,” Gray said. “I don’t even know what punch it was. I didn’t even see it. I tried to hold on and waste some time, but I got caught again. I just need to get back to the gym and fix my mistakes. I’ll bounce back.”

The following quotes and information was provided in a Showtime press release. Friday’s four-fight telecast will re-air this Monday at 10 p.m. ET/PT on SHOWTIME EXTREME.