Canelo Alvarez plans to fight a true middleweight in December 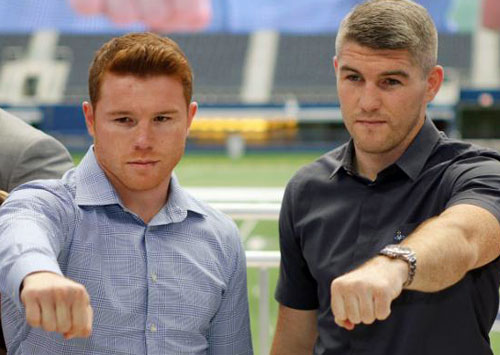 Canelo Alvarez says he plans to fight a true middleweight in December, seemingly in preparation for facing Gennady Golovkin next year.

Alvarez surprised a number of fans by announcing he would face junior middleweight titleholder Liam Smith on Sept. 17 in AT&T Stadium on HBO PPV at 154 pounds. This was after he had vacated his middleweight title and put off facing unified middleweight champion Golovkin until next year because, those around him have suggested, he needed to get acclimated to fighting at 160 pounds. Golden Boy has spoken of keeping Alvarez busy with a fight in December, possibly on regular HBO. Alvarez told RingTV.com on Monday the idea is to wage that fight at middleweight.

“That’s our goal. That’s our plan,” Alvarez said in a phone interview. “That’s what we have in mind for December, going up a division. But we’ll see what happens. But that’s our plan.”

There are plenty of middleweights for Alvarez to target to get himself ready for Golovkin, from WBO titleholder Billy Joe Saunders to WBA “regular” titleholder Danny Jacobs to former champion and Golden Boy client David Lemieux to even former Golovkin challenger Curtis Stevens. But Alvarez didn’t go into specifics for a possible opponent for December.