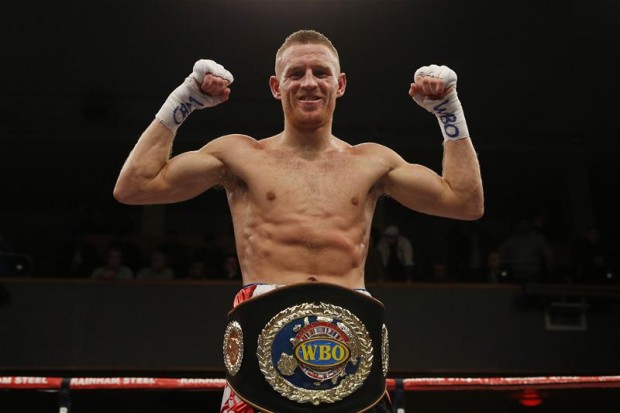 British southpaw Terry Flanagan (30-0, 12 KOs) doesn’t do trash talking but the Manchester man will tell you what’s on his mind if you push the appropriate buttons.

On Saturday, the fighter known as “Turbo”, defends his WBO lightweight title for the third time against South African veteran Mzonke Fana at the Ice Arena in Cardiff, Wales. His long-term goal, however, is to complete lightweight dominance and the unbeaten 27-year-old had no compunction about discussing his contemporaries at 135 pounds – foreign and domestic.

Flanagan, who is rated No. 4 by THE RING, is frequently linked to cross-city rival Anthony Crolla, who holds the WBA lightweight title. This reporter, playing a somewhat predictable card, requested a prediction for Crolla’s Sept. 24 clash against Jorge Linares but Flanagan swiftly deflected the request and laid out plans for his own future.

“I’m looking to get Fana out the way and then I’ll be going after (Dejan) Zlaticanin’s WBC title,” said the unbeaten left-hander. “(Promoter) Frank (Warren) has held talks with his team and they are happy to go ahead with that unification match. If I can get past Fana and Zlaticanin, Crolla will have to fight me because I’ll be number one at lightweight.

“It would be great if Crolla could beat (Jorge) Linares and I could win my next two. It would be a bigger fight and a bigger payday for both of us, although there is a lot of business to take care of first. On my part, I’m confident but Crolla and Linares is a 50/50 fight – I believe Crolla just about edges it though.”

Crolla makes the second defense of his title against Linares in a bout that will also be contested for THE RING lightweight championship. The tentative plan is for Flanagan and Zlaticanin to meet on the Tyson Fury-Wladimir Klitschko rematch card which, although still to be announced officially, looks set to take place on Oct. 29 in Manchester.

The lightweight division is therefore buzzing with excitement but, while many regard Zlaticanin as a serious danger man, Flanagan isn’t overly impressed. 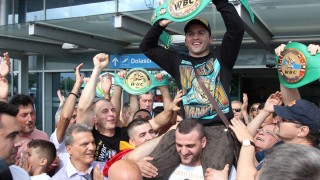 “I’ve not seen too much of Zlaticanin,” revealed the Englishman. “I remember when he fought Ricky Burns (a split decision win in June 2014) and I didn’t think he looked the best that night. I thought Ricky should have beat him to be honest, although he has come on leaps and bounds since then.

“He is a very strong and stocky southpaw but I dealt with a similar style in my win over Diego Magdaleno. Zlaticanin is actually like a southpaw (version of) Stephen Ormond (Flanagan defeated Ormond by 10-round disqualification in February 2015) who came rushing in but wasn’t the best technically. A fight with Zlaticanin is very winnable for me.”

It should be stated that Flanagan is not the type to overlook opposition and he continually referred to the danger of being complacent ahead of this Saturday’s title defense. One sensed the respect he had for the 42-year-old Fana, a former two-time 130-pound titleholder, but Flanagan does expect to win and win in style.

He said, “None of these big fights come off unless I go in there and do the business and that is exactly what I intend to do. I’ve got to stay switched on and focused. I can’t look past Fana because he’s a (former) world champion who has loads of experience and ring craft. The plan is to set a fast pace and, once I start landing clean, I should take him out.”

Realistically, however, the defending titleholder is expecting very little credit for what seems to be, on paper, an inevitable victory. “It doesn’t matter what I do,” said Flanagan with an air of acceptance. “If I knock Fana out in one round, the critics will say he shouldn’t have been in there and if I stop him late then they’ll say, it shouldn’t have gone that long.”

It may come as a surprise, or it may not, but the odds are actually wider for a Fana upset than they are for James “Jazza” Dickens to dethrone WBA junior featherweight titleholder Guillermo Rigondeaux in the main event.

The Liverpool man gets what can only be described as a fairy tale shot at the Cuban pound-for-pound entrant but Flanagan, perhaps trepid due to his own status as a prohibitive favorite, staunchly refused to write off his countryman.

“I give Jazza a chance in the fight,” he said in earnest. “Not many people do but he has the height on him and he’s a good boxer himself. Every time you see Rigondeaux get hit, which isn’t often because he’s class, he looks vulnerable.

“Rigo is 35 years old and Jazza is young, hungry and confident. I spoke to him yesterday and he’s convinced that he can do the job. If he believes in himself then it doesn’t matter what anyone else thinks.”

Tom Gray is a UK Correspondent/Editor for RingTV.com and a member of THE RING ratings panel. Follow him on Twitter @Tom_Gray_Boxing.