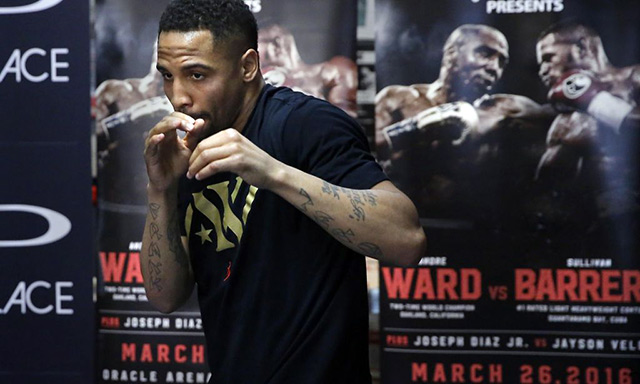 Andre Ward said he didn’t watch Sergey Kovalev’s fight on Monday against Isaac Chilemba in Russia. But he did seem to be aware of the negative assessments some have made of Kovalev’s performance. Kovalev won a unanimous decision but didn’t put on a virtuoso performance in front of his hometown fans, tiring in the later rounds.

“Some of the same people that are talking down on Kovalev right now and are saying that he’s tailor made for Ward are the same people who were saying Kovalev is going to kill me and why am I taking this fight?” Ward said on a conference call on Tuesday to hype his Aug. 6 light heavyweight bout with Alexander Brand at Oracle Arena on HBO.

“Opinions come with the wind,” he went on. “So at the end of the day I’m not putting any stock into what Kovalev did or didn’t do. He’s still the guy that everyone says he was. And it’s unfortunate for him being a guy that’s touted as a puncher because he has a lot of pressure on him. When a guy does go the distance, everyone scratches their head and says, ‘What’s wrong with Kovalev?’ That’s a lot of pressure on a guy but that comes with the territory. You’re not going to knock everyone out.”

Ward opted not to watch Monday’s fight to keep his mind only on Brand — even though Ward and Kovalev have signed for a light heavyweight championship bout on Nov. 19 at T-Mobile Arena in Las Vegas on HBO PPV.

“I didn’t watch it,” Ward said on the call. “Obviously, (Brand is) the next opponent. I didn’t watch it. I have to compartmentalize what I have to do right now and that’s just how I operate, how I stay focused. I don’t want to juggle two opponents like that. I literally have to focus on one guy and that’s Alexander Brand. If I’m not successful on Aug. 6, there is no fight down the road with me and Kovalev.”