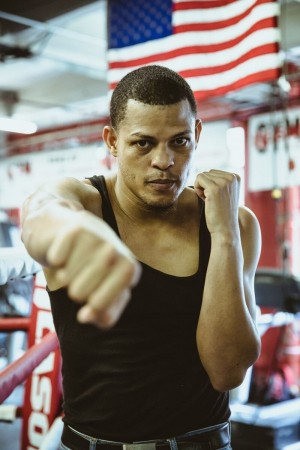 There was an elaborate press conference for Mikey Garcia in a Barclays Center boardroom before Keith Thurman’s welterweight title defense with Shawn Porter on June 25.

But that hasn’t dimmed his enthusiasm. Rojas doesn’t plan on trading punches with the heavy-handed Garcia. Instead, the former featherweight titleholder predicts he’ll upset the status quo by winning a decision against Garcia when they meet on July 30 at Barclays Center on Showtime (9 p.m. ET).

And just as John Molina Jr. changed the boxing landscape by winning a decision against Ruslan Provodnikov, who had just signed a deal with Showtime, Rojas has designs of spoiling the network debut of Garcia (34-0, 28 KOs). The bout will serve as the co-feature to Leo Santa Cruz’s featherweight title defense against Carl Frampton and will be fought at a catch-weight just below 140 pounds.

Rojas (24-2, 14 KOs) of the Dominican Republic is aware that many are viewing him as a stepping stone for Garcia to make a statement in his return against. “I like that people are looking past me,” Rojas said. “I want to beat Mikey because he’s a big name and then it will lead to a lot of big fights.”

Rojas hasn’t fought since Aug. of 2014 because of what he described as managerial issues. Because he and Garcia are both coming off long layoffs, he said the fight should be fought on even terms. Garcia was last seen in the ring in Jan. of 2014 because of a protracted legal battle with former promoter Top Rank. “It’s even because I’ve been off, too,” Rojas said. “I also haven’t fought in like two years so both of us have the same thing. It’s the same thing as Mikey — because of a contract dispute. So it will be a good fight.”