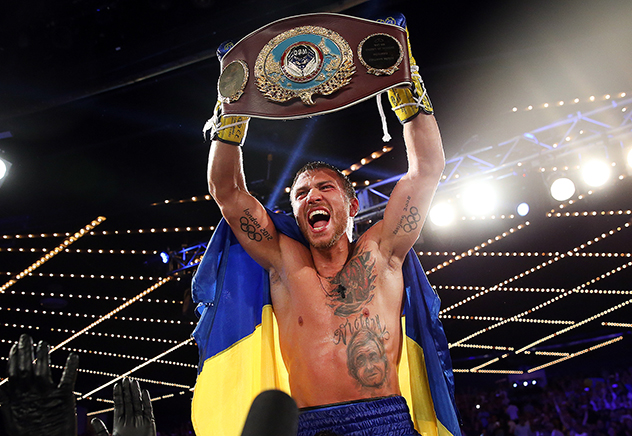 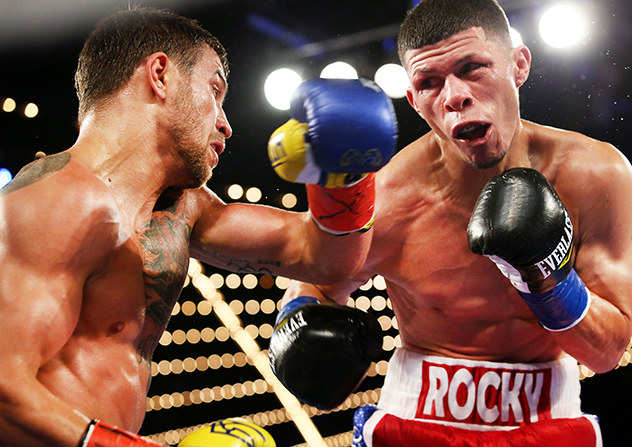 He wants as many as he can get his hands on, which is why nearly three weeks after his stunning knockout of Roman Martinez, Lomachenko has yet to decide which title he wants to vacate — his WBO strap at 126 pounds or his WBO title at 130. Before he jumped up a division, Lomachenko won a featherweight title in just his third fight.

“We haven’t decided yet,” Egis Klimas, who manages Lomachenko, told RingTV.com on Friday.

It was assumed that Lomachenko (6-1, 4 knockouts) would remain at junior lightweight to chase a rematch against Orlando Salido, but Klimas said it’s not necessarily the case. It turns out that Lomachenko is as elusive outside the ring as he is inside. “Let them assume whatever they want to assume,” Klimas said. “Why should we give away our 126 title and say, ‘Yeah, we’re fighting at 130’ and then all of a sudden we find a good fight for 126? So we’re not in a rush. We have time.”

Klimas referenced a deal he said he made with the WBO and Top Rank for the Martinez fight that gives him 60 days to decide what to do with the titles at featherweight and junior lightweight. So according to that timetable, he has until Aug. 11 to make a decision.

Klimas said Lomachenko would drop back down to 126 if fights with titleholders Leo Santa Cruz and Gary Russell Jr., who are both advised by Al Haymon, suddenly materialize. “Any champion,” Klimas said. “That’s what Lomachenko wants to do. He always wants to fight the champion. He wants to unify the titles. Any champion at 126 would be perfect.”

And the same goes at junior lightweight, with Jose Pedraza and Francisco Vargas on his radar. “To tell you the truth, 130-pound division today has much more opportunity,” Klimas said. “But there still needs to be a plan.”

Much has been made of a rematch with Salido, who won a split decision against Lomachenko in just his second fight. But Klimas stressed they want to face a titleholder first. “Let’s put it this way,” he said. “If we’re going to (fight) either a champion or Salido — we’re going to prefer the champion. Then we’re going to be talking about Salido.” Klimas would rather face the winner of a rematch between Vargas and Salido, he said.

Klimas swatted away the idea there is pressure to make their decision. Last month it was announced that two-time Mexican Olympian Oscar Valdez (19-0, 17 KOs) would face Matias Rueda (26-0, 23 KOs) for the vacant WBO featherweight title on July 23. Of course, the statement was made under the assumption that Lomachenko would move up in weight and win his bout and then vacate his featherweight bout, allowing Valdez and Rueda to fight for it.

Klimas described that situation as “not my problem.” If, however, Valdez suddenly called out Lomachenko, that could potentially influence their thinking to drop back down. “If Valdez comes back and says he wants to fight Lomachenko, then we might not give up 126,” Klimas said. “We might give away 130.”

Whatever happens, Klimas wants to avoid the confusion that marred the making of their last fight when Lomachenko was rumored to be close to making deals with a number of fighters, such as Nicholas Walters and Javier Fortuna, before he finally settled on Martinez.

“Remember before this fight? Oh, we’re fighting Nicholas Walters on April 29,” Klimas said. “So Lomachenko was preparing for Walters for the 29th. Then all of a sudden Nicholas Walters was out of the question. Then we were going to fight Javier Fortuna. But no we’re not. So a lot of names but no stability.”

Klimas also manages unified light heavyweight champion Sergey Kovalev and plans to travel to Russia in the coming days for Kovalev’s fight with Isaac Chilemba on July 11. Asked what the next step is for Lomachenko to make his decision, Klimas stuck to his talking points. “The next step for me? I am flying to Russia on July 5,” he said. “So our team has time until Aug. 11 to decide what to do with the WBO at 126 and 130.”