Will Manny Pacquiao return to the ring? 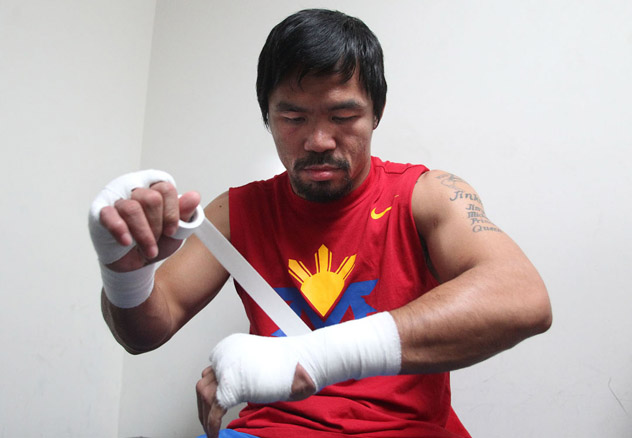 So Bob Arum is hedging his bet, placing a hold on the Mandalay Bay in Las Vegas for Oct. 15 just in case his hunch that Manny Pacquiao, who showed he had more than a lot left in his tank versus Tim Bradley in April, wants to glove up again.

Pacolytes and even casuals know that Manny exited the blood, sweat and tears pugilistic arena for the Senatorial one in his Philippines, but truly, his adios to the game was not the most vociferous.
Really, as he shut the door lightly, he almost immediately propped it ajar, and one never felt any sort of certainty that the eight-division champion, who turned pro in 1995 felt forcefully about hanging up the leather mitts for good.
Arum told the L.A. Time’s Lance Pugmire that he hadn’t sat down with Pacman, now getting his feet wet in his homeland, seeing what his workload is like, to ascertain if he’d like to un-retire. Arum will visit Pacman soon to get the lay of the land.
Meanwhile, we wondered, has Manny indicated to right hand man Michael Koncz if he’s keen on maybe gloving up for the second time this year, against Terence Crawford or perhaps Adrien Broner? “We have not agreed on anything yet, he has been very busy with his Senatorial duties,” Koncz told RingTV.com.
Does he think Pacman fights Oct. 15? And would HE prefer Crawford over Broner if the Senator says yes? Or maybe he is thinking someone else? “I will not make comments until authorized by Manny,” Koncz said. “We have not agreed to anything and if we fight again Crawford is not even a thought and never was.”
Our money says the 37-year-old punching pol’s final won-loss mark will not stay stuck at 58-6-2. Why don’t you readers hop in and make your voices heard…Think Manny will fight again? Who would YOU want to see him fight in October?