Emilio Sanchez ready for his closeup 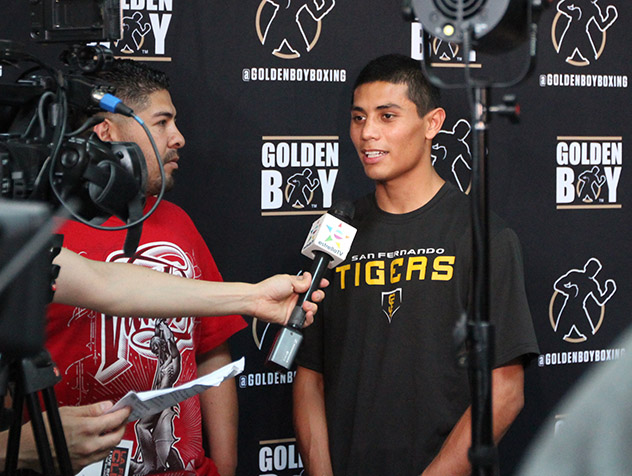 LOS ANGELES — Judging by his reserved temperament outside the ring, one can only assume 22-year-old junior featherweight prospect Emilio Sanchez would be nervous about his national television debut on July 1.

“Well, I get a little nervous, but once I get in the ring, everything goes away,” admitted Sanchez to RingTV.com Thursday afternoon at a media workout held at the City of Angels gym.

“I’m actually really excited,” Sanchez later added. “The family in Mexico, they get to watch me for the first time.”

Estrella TV (10:00 p.m. ET/7 p.m. PT) will be the channel for those family members south of the border and stateside. The entire “LA Fight Club” card held at the Belasco Theater in downtown LA can also be watched on the RingTVLive.com stream.

“He’s my toughest opponent,” Sanchez said about his next foe. “He’s an aggressive fighter that keeps coming forward, but I’m well prepared from my training camp. We’re gonna keep our distance, head movement, footwork, all that.”

Sanchez is well aware of the things he needs to work on in this prospective stage of his career. He mentioned using more head movement and practicing defense as the things he needs to get better at. As for describing himself as a fighter, Sanchez responded, “I’m a boxer. I can box, and I can be a little aggressive. I choose my punches. I fight smart.”

A soft-spoken, yet affable young man out of Pacoima, California, Sanchez shrugged his shoulders when asked about the likelihood of his wins ending by way of knockout. “It just happens,” he said.

When asked, Sanchez dismissed any angry switch that turns on once he steps in the ring, “When I was little I used to be angry,” he later revealed. In fact, that temper is what got him in the ring at the age of 12, as he was entered into the “Jeopardy Program” headed by the Los Angeles Police Department.

Just a year later, he found himself winning his first national title at the age of 13, and from then on, Sanchez knew he wanted to be a pro boxer. After making the Olympic trails, but ultimately coming up short to make the trip to London, Sanchez turned pro in 2013.

Befitting the way Sanchez was introduced to the sport, the LAPD will also be making an appearance on the July 1 card. In honor of the Susan G. Komen Foundation, a charity for breast cancer awareness and treatment, members of the LAPD will fight members of the New York Police Department in a handful of three-round exhibitions.

Many officers will also be in attendance that night. Perhaps the situation will suit Sanchez, as the same group of people who calmed that early temper of his will likely keep him composed in his biggest moment to date.