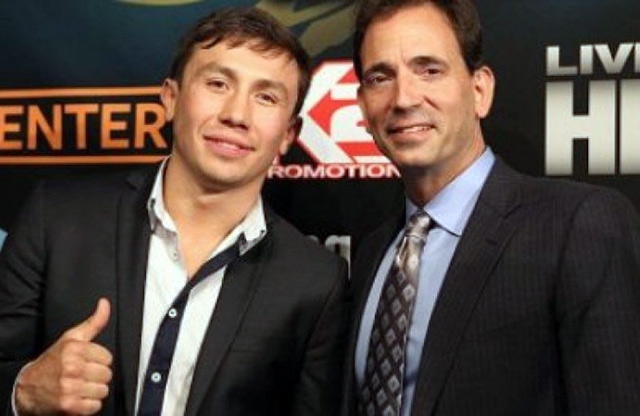 Tom Loeffler, who promotes Gennady Golovkin, will press Golden Boy about putting the verbal agreement for Canelo Alvarez to meet Golovkin in the fall of 2017 into a written contract to make the deal binding.

“We have to have something in writing,” Loeffler told RingTV.com on Thursday. “I think that’s the next step for it to be realistic is to have a binding agreement. They made it clear it wouldn’t be in September of this year so we’re looking at September of next year. If we’re going to base Gennady’s schedule around fighting Canelo next year, we’re going to have to have some firm commitment.”

Loeffler is confident it will happen. “I have a good relationship with Golden Boy,” he said. “I’m in regular contact with (Golden Boy VP) Eric Gomez and we look forward to finalizing everything.”

With Alvarez no longer in the immediate picture, Loeffler expects a deal to be finalized for Golovkin to face England’s Chris Eubank Jr. (22-1, 17 KOs) this September in England if Eubank is successful against undefeated Tom Moran on Saturday. The talks have progressed to the point where if Eubank wins, a deal could be reached shortly.

“Hopefully we can finalize the agreement with him if everything goes the right way on Saturday,” Loeffler said. “We’ll finalize the date and the venue once Eubank commits to the fight after Saturday.”

Golovkin plans to fight twice more in 2016 and twice next year before the proposed September showdown with Alvarez, Loeffler said. One of those fights in 2017 will likely land in Golovkin’s native Kazakhstan, where there is a 38,000 seat stadium waiting for him, Loeffler said. “That will be his homecoming fight,” he said. “We’ve been trying to figure out when the right time to do that fight is and next year makes sense.”

Loeffler initially reached out to WBO middleweight titleholder Billy Joe Saunders once it became clear Canelo was out of the question for the fall “because that’s the last title that Gennady is missing.”

He soon realized, however, the fight wouldn’t happen this year. “For as much as Saunders says that he wants to fight Gennady, the way those negotiations went it was pretty clear he wants no part of Gennady,” Loeffler said. “And that’s ok. If he wants to keep the title and make small title defenses, that’s ok. If you want to prove that you are a world champion and at the top of the division, there’s a different way to go about that.”

Loeffler is hopeful the fight will happen with Alvarez, and he was looking through rose colored lenses when he said facing Canelo in 2017 was nothing compared to the marathon negotiations that took place to make Floyd Mayweather-Manny Pacquiao last May.

“I don’t think Caneo is afraid to fight anyone,” Loeffler said. “I think he wants to fight Gennady. I think from the marketing side and the promotional side they were looking at building it up. And it’s only a year away so I can’t fault them for that. It’s not a five-year process like we saw with Floyd. If it was our decision, we would fight Canelo a lot sooner.”