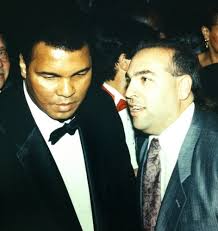 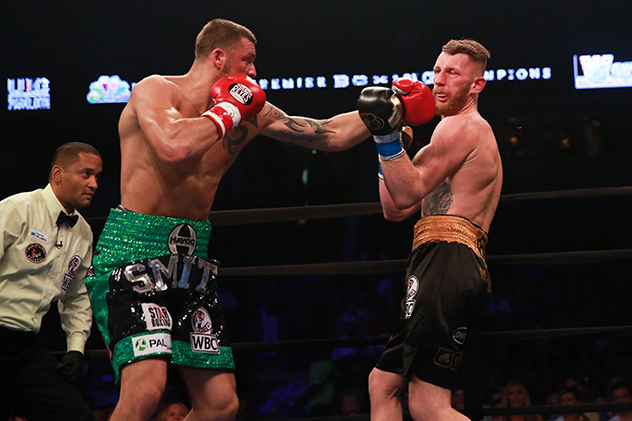 That deafening roar you heard over the weekend was Ron Katz celebrating Joe Smith Jr.’s first-round destruction of Andrzej Fonfara.

Katz, a matchmaker for Smith’s promoter Joe DeGuardia, screamed so loud his wife, Barbara, bolted downstairs, thinking someone had broken into their Long Island home and attacked him. Katz was just as boisterous on Twitter, scolding those who had doubted Smith’s right to be in the NBC main event with the higher-ranked Fonfara. The unheralded Smith (22-1, 18 knockouts) dropped Fonfara twice, stopping him at 2:32 of the opening frame.

“To all those who abused me for the Smith match to quote my friend Larry Holmes ‘you can kiss my ass where the sun don’t shine’,” Katz wrote on Twitter. “And it would be F-ing nice if for once some (of) you writers can give a modicum of credit to @joedeguardia and myself.”

Katz’s confidence was based on the stylistic approach of both fighters. Katz believed that Fonfara would be vulnerable once the physically imposing Smith started backing him up.

“The Fonfara fight came along and (DeGuardia) said, ‘What do you think?’ and I said I think he destroys the guy,'” Katz told RingTV.com on Tuesday. “Based on styles — Fonfara is the kind of guy who has to come forward and be allowed to do what he needs to do, which is break guys down and throw a lot of punches. But if you can put Fonfara on his back foot, he’s a completely different fighter.”

The plaudits are still coming in for a promoter and matchmaker who have managed to stay relevant by producing a number of breakthrough performances like Smith’s on Saturday.

DeGuardia plans to take advantage of Smith’s quick rise, just as he has done with others in his stable. There will be no happy homecomings, no easy touches as a show of gratitude for the 26-year-old union laborer, according to Katz. No, they’re targeting WBC light heavyweight titleholder Adonis Stevenson, who faces Thomas Williams Jr. on July 29. “If Stevenson prevails in that, obviously with Kovalev and Andre Ward already scheduled, Stevenson needs another dance partner, who would have been Fonfara,” says Katz. “But now you have the guy who absolutely annihilated him. He’s a breath of fresh air, new on the scene.”

It’s a familiar playbook for Star Boxing. The Bronx-based company orchestrated the ascent of Chris Algieri, who patiently cut his teeth at small club shows in Long Island before overturning the landscape with a split decision win against Ruslan Provodnikov in 2014. He has since secured big money fights against Manny Pacquiao, Amir Khan and Errol Spence. DeGuardia and Katz hope to do the same with undefeated junior welterweight Cletus Seldin, a highly marketable bowling ball of aggression who is 19-0 and on the precipice of a big, high-profile fight.

Star Boxing also co-promotes the former U.S. Olympian Demetrius Andrade. He just had a breakout win of his own on Showtime against Willie Nelson earlier this month. But Andrade was a known quantity out of the amateurs. That wasn’t the case for Algieri, Smith and now Seldin.

Star Boxing has only had Smith, who is from Brookhaven, Long Island, for his past six fights. The former New York Golden Gloves champion was a boxing orphan early on, starting his career with promoter Jimmy Burchfield before moving to Lou DiBella and then DeGuardia. Said Katz, “He’s bounced around a lot.”

The script for all three has been the same: Gradually bring them along at the tiny Paramount Theater in blue-collar Huntington, Long Island. There, in front of friends and families, in a frenzied environment reminiscent of a high school gym, Katz could take his time and move them along until they were ready for new frontiers. It then fell upon DeGuardia to find the right opening to showcase their skills. Star Boxing does between six and eight fights there annually.

“We treat every fighter the same way,” Katz said. “Nobody gets preferential treatment. We all work very hard because we can’t stay in business in this day and age if we don’t do things like this.”

Algieri, Smith and Seldin have another thing in common besides their humble beginnings. Smith and Seldin are Caucasian; Algieri is half Italian and half Argentine. It’s a reality that allows them to tap into markets not usually exhausted, Katz says. There will always be interest in a Great White Hope. Of course, they also have to be able to fight, which the three can clearly do.

“Who was the last elite, Caucasian, American champion?” asked Katz. “Forget about the Europeans because there are a ton of them. Very few, so now you have the kids like Smith, like Algieri, like Cletus, and those are, quite honestly and frankly, the kids that will attract your crossover fans. You’ll always have the elite Mayweather, Pacquiao types that will do that, but good fighters like Keith Thurman and Shawn Porter might not necessarily do that. A casual fan, yes, but you want to get the real crossover fans.”

It might not be politically correct to refer to a fighter’s cultural background as a selling point, but it’s the truth when it comes to boxing. In an era where top American Caucasian boxers are scarce, Katz’s point is that Smith is an anomaly.

“And it’s no (disrespect) to the African-American fighter, Hispanic fighter or otherwise,” Katz went on. “Joe Smith’s ethnicity and his hard-helmet, blue-collar background will appeal to those who might not otherwise be interested. Cletus Seldin — a Jewish kid. When was the last Jewish kid who was exciting like Cletus Seldin and could punch like hell like Seldin?”

And for a small company like Star Boxing, it’s all about taking advantage of the opportunities that come along. “The shows at the Paramount are expensive shows,” Katz went on. “And although we sell out just about every show you’re still not making the kind of money one needs to bring a company to the next level. When you’re getting fights like Amir Khan and Manny Pacquiao and Fonfara now — then all of a sudden, if the fighter’s making good money, then the company is making good money and that’s the way it’s supposed to be.”