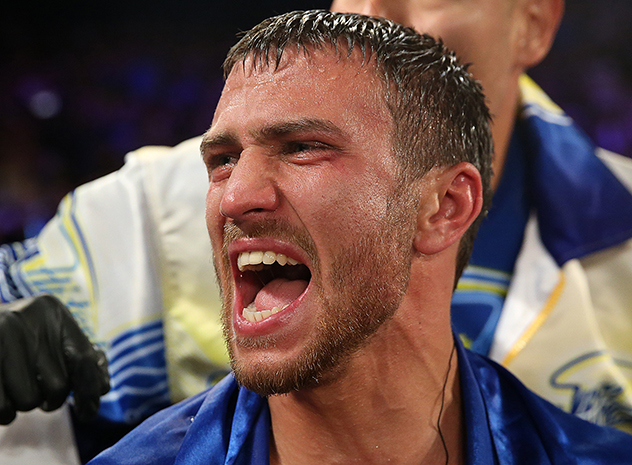 Vasyl Lomachenko: Everyone had better get used to one-sided fights involving Vasyl Lomachenko, such as the one against then-WBO junior lightweight titleholder Roman Martinez on Saturday night at the Theater at Madison Square Garden. There are many more coming. Our job is to appreciate what we see, which isn’t difficult to do. Lomachenko might have boxing ability comparable to Floyd Mayweather Jr. at his peak, skills that were honed over many years as one of the greatest amateur fighters in history. The difference is that Lomachenko isn’t the boring hit-and-for God’s sake-not-be-hit fighter that Mayweather was. Lomachenko intends to hurt his opponents, not merely outclass them as Mayweather did so many times. And, as we saw on Saturday, he has the punching power to go with his approach to the game. In other words, I don’t see a flaw in Lomachenko. Do you? I doubt Martinez does. He was baffled from the opening bell by Lomachenko’s remarkable footwork, which set up quick, damaging punches before a helpless Martinez could react. “I couldn’t see his hands,” Martinez said. And then, for a bit, he couldn’t see anything. A left uppercut-right hook combination ended the fight in one breathtaking moment 1 minute, 9 seconds into the fifth round, the perfect exclamation point on a spectacular performance by Lomachenko (6-1, 4 knockouts). Bravo! Everyone had better get used to that, too – spectacular performances. This kid is truly special.

Demetrius Andrade: Andrade’s career had been stuck in neutral for some time because of those dreaded promotional problems. The unbeaten former WBO junior middleweight titleholder had fought only twice in 2¾ years before stepping into the ring to face Willie Nelson on Saturday in Verona, New York. If anyone needed an impressive victory to boost his name, it was Andrade. And he got it. Andrade (23-0, 16 KOs) never looked better as won every round and put Nelson (25-3-1, 15 KOs) down four times – including twice in the 12th round – before referee Dick Pakozdi finally stopped the fight 1:22 before the final bell. Nelson, a talented, experienced contender, had lost twice before but never like this: He was outclassed and then brutally stopped for the first time in his career. As a result, any doubt that Andrade belongs among the best in a deep 154-pound division dissipated into the cool air of upstate New York. I don’t want to overreact after one victory but, based on what I saw, I might pick him to beat anyone in the division. The only exceptions might be the always-difficult Erislandy Lara and powerful Canelo Alvarez, if the latter ends up fighting at 154 pounds, and even those fights would be toss-ups. I believe Andrade is that good. Now it’s up to him to remain active so he can maintain the momentum he established on Saturday.

John Molina: The fight between Molina and Ruslan Provodnikov on the Andrade-Nelson card was in effect an eliminator. The winner would survive to take part in at least one more important fight, the loser might not. Surprise, surprise: Molina was the survivor. And he did it in a way that no one expected: He outworked the hard-charging Russian and boxed, which is saying something for a fighter known for his power and crude skills. Molina (29-6, 23 KOs) kept Provodnikov (25-5, 18 KOs) on the end of a long jab for much of the fight, which made it difficult for Provodnikov to throw as many punches as he normally does. The CompuBox numbers are stunning for those who have followed the careers of both fighters: Molina landed 377 of 1,092 punches, Provodnikov 283 of 705. The judges scored it 116-112, 115-113 and 117-111, all for Molina. And no one argued with that assessment. I have no idea what lies ahead for Molina but, as he said, he’s improving. And he has always been fun to watch, which is why he has continued to get TV dates. Provodnikov? He also has been one of the more entertaining fighters of the past several years, which makes it difficult to imagine boxing without him. However, he said in so many words afterward that something within him was missing. We might’ve seen the last of him at this level if he doesn’t find it.

Dejan Zlaticanin (22-0, 15 KOs) stopped Franklin Mamani (21-3-1, 12 KOs) in three rounds to win the vacant WBC lightweight title on the Andrade-Nelson card. Zlaticanin looked good but that was too predictable given Mamani’s limited ability. The Bolivian had fought outside his native country only twice before and was nearly shut out by obscure opponents both times. Terrible matchup, particularly for a title. I hope Zlaticanin next faces the winner of a proposed fight between Jorge Linares, the WBC “champion in recess,” and WBA titleholder Anthony Crolla. ÔÇª Felix Verdejo (22-0, 15 KOs) was another fighter in need of an impressive performance. The young Puerto Rican was winning fights but dazzling no one, which had slowed his rise to stardom. He picked up a little momentum on the Lomachenko-Martinez card. Verdejo hurt rugged, but overmatched Juan Jose Martinez (25-3, 17 KOs) with a hard right in the fifth round and followed with a barrage of punches that forced the referee to stop the fight. “My career depended on this fight and I knew that,” Verdejo said afterward. And that’s how he fought. ÔÇª One-time cruiserweight titleholder Enzo Maccarinelli (41-8, 33 KOs) might be finished as an elite fighter, as he was stopped in the first round by Dmytro Kucher (24-1-1, 18 KOs) on Friday in London. Maccarinelli, who was coming off a fourth-round knockout of ancient Roy Jones Jr., arguably hasn’t won a meaningful fight since his title run between 2006 and 2008 unless you count his rematch with solid Ovill McKenzie in 2013. Maccarinelli is 35.