Vasyl Lomachenko KOs Martinez in Round 5 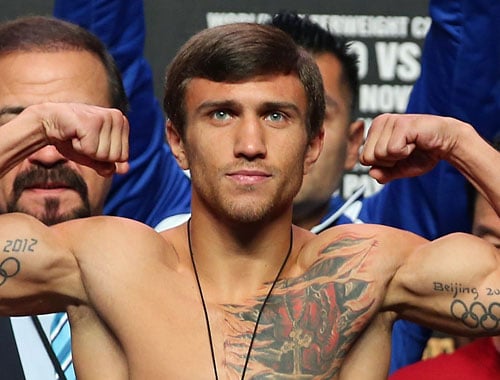 In just his seventh professional fight, Vasyl Lomachenko became a two-division titleholder with a fifth-round knockout of WBO junior lightweight incumbent Roman Martinez. It was the main event of an HBO Boxing After Dark broadcast from Madison Square Garden in New York.

Lomachenko’s (6-1, 4 knockouts) only loss came against Orlando Salido, who was Martinez’s last opponent in a controversial draw, but none of that added up to any trouble for the Ukrainian southpaw, who had Martinez under control from Round 1.

Superior speed, footwork, ring generalship, combinations, power, evasiveness — all of it was on display in the arsenal of Lomachenko, whom many have touted as having pound-for-pound credentials despite his relative inexperience (in the pros, anyway — he reportedly had a an astonishing amateur record of 396-1 and won Olympic gold twice).

The finisher was a left uppercut to set up a laser-accurate right hook that sent Martinez (29-3-3, 17 KOs) to the canvas where he was counted out.