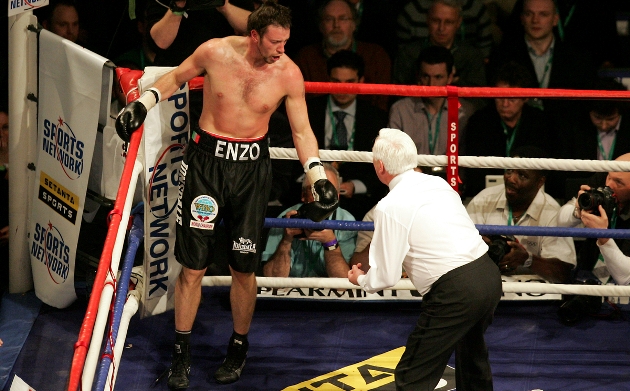 Kucher (24-1-1, 18 KOs) engaged in a battle of jabs with his rangier foe in the opening two minutes before threading home a short left hook which steadied the Welshman’s legs. Sensing Maccarinelli was dazed, Kucher followed up with a sharp three-punch combination, punctuated once more by the left, and floored him heavily.

Maccarinelli, as game as they come, tried desperately to recover but his equilibrium was shot. The referee, Giuseppe Quartarone, had a good look into his eyes before waving the bout off and Gary Lockett, Maccarinelli’s trainer, was brandishing a white towel just in case the official had an off-night.

Shortly after the bout, Maccarinelli (41-8, 33 KOs) revealed that he would be retiring from the sport. A terrific ambassador for U.K. boxing, the affable Welshman traversed between cruiserweight and light heavyweight, claiming British, Commonwealth and European titles along the way.

In July 2006, Maccarinelli was upgraded to full WBO cruiserweight titleholder shortly after a ninth-round stoppage of Argentinian Marcelo Fabian Dominguez. He would make four successful defenses of that belt before being stopped in two by David Haye in a unification contest.

In December of last year Maccarinelli became the latest fighter to inflict a serious knockout defeat on the resume of Roy Jones Jr.

Kucher put cruiserweights on notice with his performance and he can punch very hard with both hands.