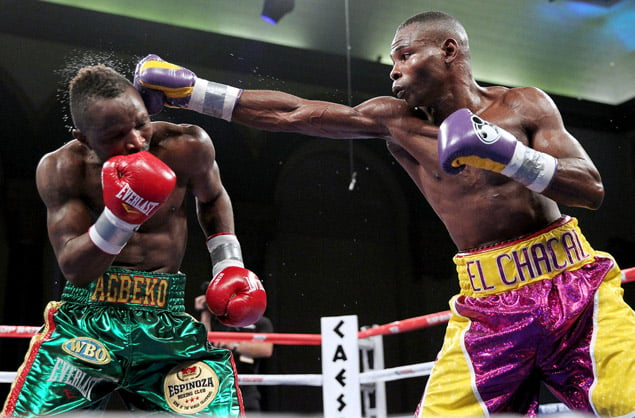 CANASTOTA, N.Y. — Lupe Pintor, who will be inducted into the International Boxing Hall of Fame here Sunday afternoon, is proud not only to be a two-division (bantamweight and junior featherweight) world champion, but especially a Mexican world champion. Born poor into a working-class family in Cuajimalpa, just outside Mexico City, he considers it a badge of honor to be joining such fellow up-the-hard-way Mexican standouts as Julio Cesar Chavez, Salvador Sanchez and Ruben Olivares in the hallowed halls of the IBHOF.

Pintor, in fact, has almost nothing negative to say about any highly accomplished Mexican fighter, with two notable exceptions: Canelo Alvarez and Julio Cesar Chavez Jr. 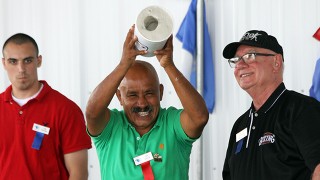 Asked for his thoughts on some of the legendary world titlists from his homeland, Pintor, 61, said Chavez Sr. was “the best Mexican fighter ever,” the late Sanchez was “probably one of the best Mexican champions” an Olivares “was an idol of mine when I was a child.” He also praised potential future Hall of Famers Marco Antonio Barrera and Erik Morales, calling Barrera “a great warrior and great representative of Mexican boxing” and Morales “a great fighter who gave his soul to the ring.”

But, while acknowledging that the 25-year-old Alvarez is “one of the best and most recognized Mexican fighters today,” he said “in my time, he probably wouldn’t have been able to do much.”

Pressed further about his seemingly tepid support for Alvarez, Pintor opined, when asked about the much-anticipated matchup of Alvarez and Gennady Golovkin, “It’s a fight that probably will never happen. I believe `Triple G’ would win, and that’s why it’s not happening.”

Also not happening is the increasingly faint likelihood that Chavez Jr. ever will approach the boxing legacy crafted by his famous father.

“The great champion of Mexico for me was Julio Cesar Chavez Sr.,” said Pintor, who was 56-14-2 with 42 wins inside the distance from 1974 to 1995. “He became a boxer because of necessity. But his son ÔÇª the necessity, the hunger, they just weren’t there. There was no need for that to be there. He’ll never be a shadow of what his father was.”

Pintor also said that too many Mexican kids taking up the sport now “want to imitate boxers like Canelo, which is not all that good. They develop mannerisms that aren’t truly about boxing.”

`THE COLONEL’ AND GENERAL HOSPITAL

Col. Bob Sheridan’s oft-operated-on body isn’t exactly held together with spit and baling wire, but his medical history is such that it’s almost a miracle that the longtime broadcaster, who’ll be part of the IBHOF’s Class of 2016 (in the Observer category), has been able to carry on as long and as well as he has.

“Seven heart attacks, a quadruple bypass, a valve replacement,” Sheridan, 72, whose ceremonial rank was conferred upon the Boston native by the Commonwealth of Massachusetts in 1983, replied when asked about the myriad physical ailments he’s had to overcome in order to call fights from his ringside seat at locales near and mostly far.

But wait, he’s just getting started.

Still, the Colonel — “When somebody calls my house and asks my wife `Is Bob there?,’ she doesn’t even put him through,” he laughed – considers himself fortunate to still be doing something he has loved for 50 years. When he does the international broadcast of the Terence Crawford-Viktor Postol junior welterweight unification fight from Las Vegas’ MGM Grand on July 24, it’ll be his 1,000th world title bout, and somewhere north of 10,000th fight all told. That makes for a lot of frequent-flier miles; he said he’s already been to New Zealand six times this year and twice to Australia, with assignments to China and the Philippines always a possibility.

“I’ve been lucky,” he said. “I’ve never had a heart attack start when I’m on a 14- or 15-hour flight. And when I do fly, I’m sitting in my very comfortable First Class seat. It’s pure luxury.”

Sheridan said his journeys are almost a piece of cake compared to those endured by young fighters trying to claw out a toehold in a sport that often demands much and gives little.

“There are little Mexican kids 15 or 16 years old taking a 30-hour bus ride from Los Mochis (in Northern Sinaloa) up to Tijuana to fight,” he said. “They get about 50 bucks, jump back on the bus and go back down to Los Mochis. That’s 60 hours round-trip and they’re making almost nothing, so what do I have to complain about?”

Harold Lederman, the longtime “unofficial judge” for HBO’s boxing telecasts, was telling a story about the late Pat Summerall, the velvety-toned and accent-free play-by-play announcer for NFL football.

“An amazing commentator,” Lederman, 76, who will be inducted in the Non-Participant category, said of the former New York Giants placekicker. “But you have to remember that this was a guy that came out of Arkansas and had a horrible accent. They kept sending him to school until he got rid of the Arkansas accent. He is really one of the few people I know in sports where they changed the way he spoke.”

It should be noted that an Arkansas accent doesn’t sound horrible in Arkansas. But to their credit, Lederman’s bosses at HBO never tried to modify his thick Bronx accent that is as singularly identifiable as a fingerprint. After advising viewers of his updated scorecard, Lederman will say, “OK, Jim!” and defer to blow-by-blow announcer Jim Lampley, whose broadcasting style leans more toward the dulcet tones of Summerall and baseball legend Vin Scully. It is an audio transfer that can be a bit jarring, but somehow it works.

“I was born with a Bronx accent,” said Lederman. “What can you do about it? I never lost my Bronx accent.”

Lederman was invited by HBO executive producer Ross Greenburg to serve as an “expert commentator” for the March 22, 1986, heavyweight title bout between WBC champion Pinklon Thomas and Trevor Berbick, a 7-to-1 underdog.

“Everybody expected Thomas to win fast, and if he had, I might never have done another fight for HBO,” Lederman said. Fortunately for Lederman, Berbick had brought in renowned trainer Eddie Futch – the one and only time Futch ever had worked Berbick’s corner – and the challenger went on to win a unanimous decision. Lederman got enough time to get called back, and he’s been at it ever since.