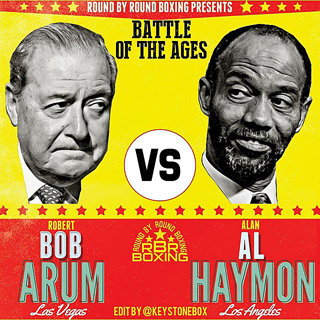 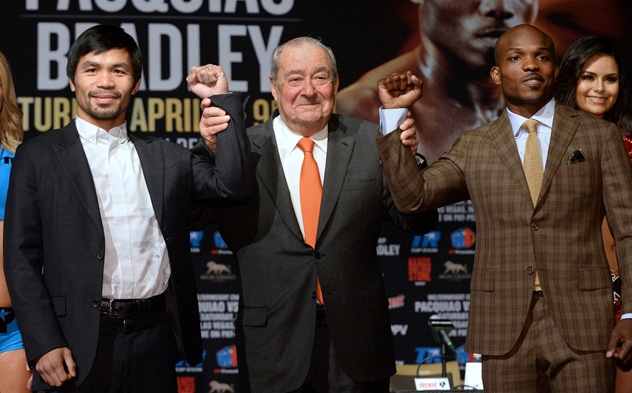 Top Rank CEO Bob Arum acknowledged that he and former rival Al Haymon have had a number of conversations since the two sides settled a $100 million federal anti-trust lawsuit last month. Arum was coy about what the two have discussed. But if anything, the ongoing dialogue is an encouraging sign for those eager to see some of the matches that can be made between them.

“We talked as recently as yesterday, and we’re going to talk again on Monday,” Arum told a small group of reporters on Thursday. “And eventually we’ll come up with some matches that we’ll make. There’s nothing that will prevent that from happening.”

While the two are on speaking terms, no specific fight has come up thus far, he said. “We settled the case,” Arum said before a press conference at Madison Square Garden for Vasyl Lomachenko’s title bout with Rocky Martinez Saturday on HBO. “There’s no impediment. We talk from time to time. So that means when there’s a match that could be made that’s an attractive match, we’ll make it. But right now we’re not talking about a specific match.”

Arum did reveal that Haymon is fond of at least one of his fighters. “Haymon knows enough about boxing – and he’s told me, he appreciates Lomachenko’s ability,” he said. Haymon has a number of fighters, such as featherweight titleholders Leo Santa Cruz and Garry Russell Jr. that would make sense for Lomachenko in the future.

However, the 84-year-old promoter said it was too soon to determine what if anything, may result from their new relationship. “It remains to be seen the kinds of fights that come out of it,” Arum said. But vague and elusive as he was on Thursday, Arum said he wouldn’t rule out the two working together for fights “this year, next year, whenever it makes sense,” he said.

The recent death of Muhammad Ali and the obligations that Arum has had to fulfill, such as attending Friday’s funeral in Louisville has pushed back any serious discussions so far, he said. Arum, who once promoted Ali, said it shouldn’t come as a surprise that he and Haymon are now speaking, despite their bumpy past. The two did come together to make Floyd Mayweather Jr.’s bout with Manny Pacquiao last May, but the negotiations for that fight were said to have been contentious.

“That’s why I’ve been in boxing as long as I can,” said Arum, who celebrated the 50th anniversary of his first promoted bout in March. “I compartmentalize everything. You have a dispute with a guy — it’s over, you settle and you move on. You got to be stupid to bear grudges. You have people in this business that spend their whole life tearing themselves up from grudges from something that happened 20 years ago.”

Arum was asked if he was still open to moving across the street and putting fights on Showtime, as he once suggested. Arum has supplied fights only to HBO in recent years while Showtime has been the home of Haymon. Arum declined to answer, but the question did prompt him to launch into a speech about the influence of the premium networks and why he thinks the power they wield should be diminished. “I don’t think that the networks should dictate where the fights should be,” Arum said. “I think the networks should just concentrate on putting on good fights.” He didn’t elaborate his point beyond that.

Mitch Abramson is a former reporter for the New York Daily News and can be reached at: @Mabramson13.