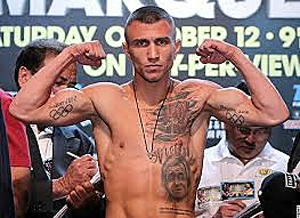 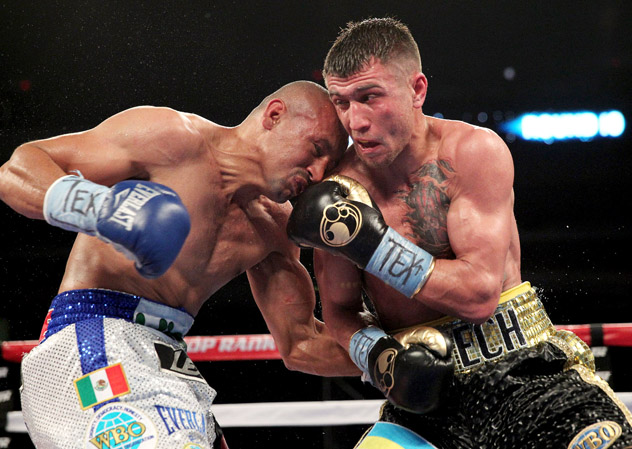 Vasyl Lomachenko is nearly a finished product in the ring. His English, on the other hand, is still progressing.

Yet, when he was asked to assess Saturday’s donnybrook between Francisco Vargas and Orlando Salido, the two-time Olympic gold medalist smiled quickly and shrugged his shoulders.

“It’s a Mexican style,” he told RingTV.com on Wednesday without the use of a translator, referencing a pressure-type of boxing that Gennady Golovkin has made his catchphrase.

No words were necessary to describe Vargas and Salido’s brutal magnum opus on Saturday. While Lomachenko believes Salido did enough to edge Vargas, the fight was ruled a majority draw. “First of all, I was very surprised how nice they can fight, from the first round to all the 12 rounds like that,” Lomachenko said through translator/manager Egis Klimas. “My decision – I would say just by a little but Salido won the fight.”

Lomachenko (5-1, 3 knockouts) visited Salido in the dressing room roughly 10 minutes before his ring-walk and wished him luck. “You must win,” he recalled saying to him. “It was very important for me for him to win that fight.” Lomachenko craves a rematch with Salido, who won a split decision against Lomachenko back in 2014 in just his second fight. “I really want to fight him,” the Ukrainian said.

Salido is expected to be in attendance for Lomachenko’s WBO junior lightweight clash with titleholder Roman Martinez Saturday at Madison Square Garden’s Theater. Lomachenko hopes to put on a show for Salido- minus the violent exchanges that marked Salido-Vargas. “There is no way I’m going to do the same thing that he did in the ring,” said Lomachenko, who will try to make history by winning a title in a second division in just his seventh pro fight. “Of course, if he’s going to be in the crowd there I will be happy. But I read in some news report that it doesn’t make any sense for him to be here.”

Lomachenko said that Salido (43-13-4, 30 KOs) is under the impression that Lomachenko won’t fight him because Salido doesn’t own a title. Klimas clarified Lomachenko’s position. “His preference is to fight a champion,” Klimas told RingTV.com. “But if a champion is not available he would fight anybody who is strong in the weight class, which is Orlando Salido, Nicholas Walters. But the preference is to unify the titles, to fight the best — and the best is the champion.”