Sean Gibbons: ‘What more could Salido have done?’ 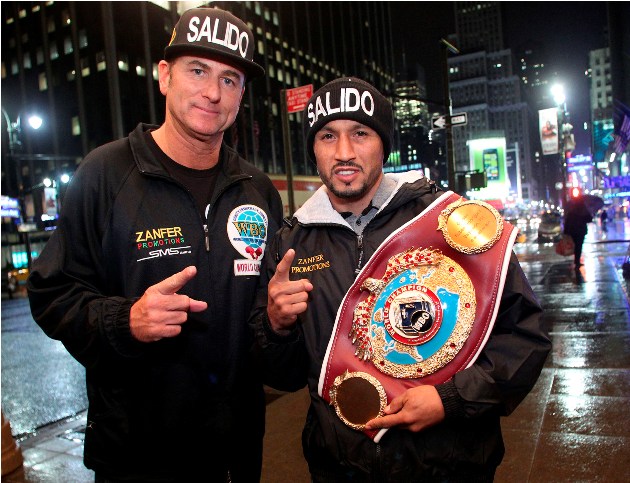 That was the phrase Chicago Cubs great Ernie Banks would use throughout his Hall of Fame career, regarding doubleheaders. Manager Sean Gibbons believes that as well but for Orlando Salido, the fighter he manages.

Salido and Francisco Vargas fought to a spirited and breathtaking 12-round war Saturday night at the Stubhub Center in Carson, California.

The fight, which was for Vargas’ WBC junior lightweight title, ended in a majority draw. As a result, Vargas retained the title.

The buzz the fight generated is still lingering on social media. With the fight fresh in fans’ memories, Gibbons is hoping to build off the momentum from the spectacular fight to a possible rematch.

“You can’t settle on a draw after what both men did,” Gibbons told RingTV over the phone Sunday evening. “The fight shouldn’t be left on that note. We need two.”

Salido (43-13-4, 30 knockouts) was coming off a draw in his previous fight against WBO junior lightweight titlist Roman “Rocky” Martinez on Sept. 12. Many boxing scribes at ringside thought Salido did more than enough to win.

The Vargas-Salido fight was much closer. Both fighters were hurt at certain points during the bout, with Salido scoring the more-telling blows in the championship rounds. Gibbons, of course, believed Salido did enough to win.

“Orlando is a talented fighter. There were a few times when Orlando was hurt but he wasn’t wobbled. Orlando did great off the ropes, outboxing Vargas because that’s his home, his sweet spot.

“Five years ago, Vargas has no chance against him. Orlando is a like a car with 400,000 miles on it. It may have wear-and-tear but it still runs good. Orlando is 35 (years old) and he’s been involved in ‘Fight of the Year’ candidates over the last two or three years. That’s why it hurt me when Orlando looked at me when the decision was announced. What more could he have done?”

Salido does have options after a well-deserved rest over the next month or so. Gibbons told RingTV that Salido plans to return to the ring in November.

They are pursuing a rematch with Vargas (23-0-2, 17 KOs) but Gibbons isn’t holding his breath that the Mexico City resident will fight Salido again so soon.

“Not once during the post-fight interview did Vargas offer Orlando a rematch. It was almost as though they were saying, ‘We don’t want to see Orlando.’

“Orlando will be back in November. We want him to remain active. We have many options but the Vargas fight is the number one fight we’re looking at. Let’s do it at The Forum (in Inglewood, California), where we can have a bigger audience and the publicity would be tremendous.”

HBO will likely pick up the rematch, if there is one. Nielsen ratings for Vargas-Salido, which were released early Tuesday, had an average of 833,000 viewers, peaking at 954,000.

It would be interesting to see if the network would buy a fight featuring Salido without Vargas. One possibility is if Salido faces former WBC titlist Takashi Miura (whom Vargas defeated for the title last November) with the winner facing Vargas.

That all depends if Gibbons and Golden Boy Promotions, which promotes Vargas, come to an arrangement for a fight this fall or in 2017.

“We thank Peter Nelson for having the vision to have Orlando on the broadcast. Because of Orlando’s record, he took a risk but it paid off. Orlando is a hot commodity and I’m sure the network will be very interested to have Orlando back on.

“Vargas brought the belt but he didn’t bring the people like Orlando did. I’m sure Nelson and other powers that be took note of that on Saturday night.”