Boxing stars react to the passing of Muhammad Ali 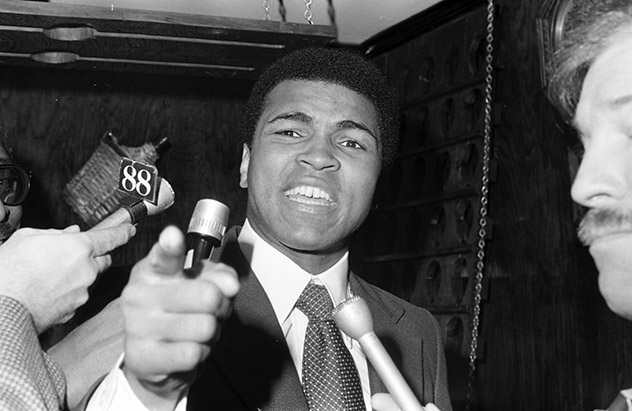 Muhammad Ali taunts Joe Frazier during a press conference on January 17,1974, for at Pen Restaurant in New York, New York. (Photo: THE RING)

As expected, social media went into meltdown following the passing of the legendary Muhammad Ali, who tragically succumbed to respiratory illness on Friday. The following is only a small portion of the tributes that have been left on a sad day for the world of boxing, the world of sport and the world in general.

“My idol has left us. I will always remember you as the best and will follow your example. Your legend will live forever.”

“RIP Muhammad Ali. The greatest sporting icon of all time! A man who transcended boxing and put our sport on the map. His name will live FOREVER.”

“A true inspiration for everyone around the world, what a legend, Muhammad Ali.”

“So sad to hear Muhammad Ali has passed away. Greatest of all times. RIP champ.”

“The passing of a great man, an icon who inspired so many and who done so much for his people.”

“RIP to the world greatest, you will truly be missed.”

“A very sad day for my sport. There are few real heroes left in this world. Today we lost ‘The Greatest of All Time.'”

“RIP Muhammad Ali, a legend who transcended sport and was a true champion for all.”

“Ali, Frazier & Foreman, we were (one) guy. A part of me slipped away, ‘the greatest piece’ Muhammad Ali.”

“RIP Muhammad Ali. The passing of a Legend.”

“‘The Greatest’ one of the most influential men that ever lived. RIP Muhammad Ali”

“RIP The greatest of all times in many different ways.”

“It was the biggest honor to meet Muhammad Ali last year at his house, will never forget the Greatest of All Time RIP. In boxing and in life, an inspiration to mankind.”

“The world has lost an incredible legend. I have lost a phenomenal friend and mentor. Much love.”

“Woke up to the sad news Muhammad Ali has passed away. No more suffering for you now champ. R.I.P. It was an honour to (have) met you. Greatest x”

“My heart is deeply saddened, yet both appreciative and relieved that the greatest is now resting in the greatest place.”

“He was and still is an inspiration to so many. RIP The Greatest.”

“RIP to the GOAT. A man of character, faith, dignity and professionalism. You’ll continue to inspire us to make this world a better place.”

“A giant among men, Ali displayed a greatness in talent, courage & conviction, that most of us will NEVER be able to truly comprehend.”

“Muhammad Ali was a great fighter and an inspirational human being. RIP champ.”

“Today my heart goes out to a pioneer, a true legend, and a hero. Not a day went by entering the gym that I didn’t think of you.”

“Today we lost the greatest sportsman that ever lived.”

“We lost a giant today. You will always be GOAT. Our hearts and prayers go out to the Ali family. May God bless them.”

“Sad news to wake up to, the loss of legend, icon, there will never be another like him in our sport. RIP Ali.”

“God came for this champion. So long great one.”

“This one hurts. I have so much to say, but don’t know how to say it. But for now, you will be missed & I appreciate you so much.”