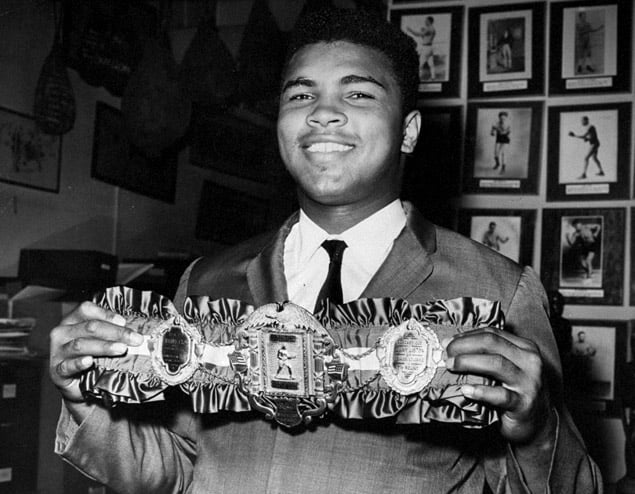 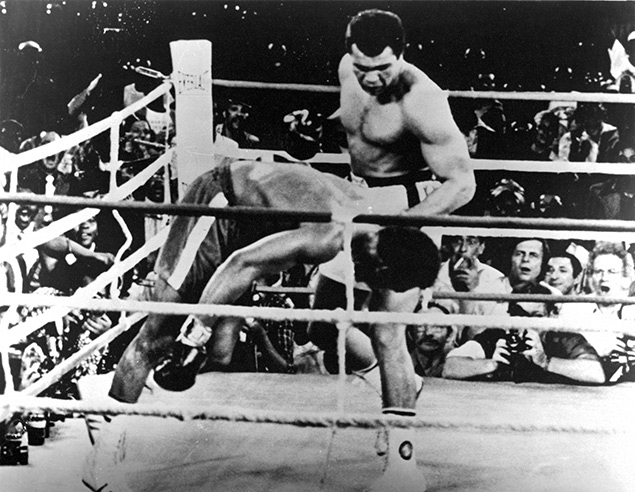 Ali KOs Foreman in October 1974. Photo from THE RING archives

1954 – Takes up boxing after his bicycle is stolen.

1960 – Wins the gold medal in the light heavyweight division in the Rome Olympics. Later throws his medal in the Ohio River after being subjected to racism. Turns professional in October.

1964 – Feb 25. Stops Sonny Liston in the seventh round to win the heavyweight championship in Miami Beach, Florida. As a practicing Muslim, changes his name to Muhammad Ali.

1965 – May 25. Wins highly controversial rematch against Liston by first-round knockout in Lewiston, Maine.

1967 – April 28. Claiming conscientious objector status due to his religion, refuses induction into the U.S. armed forces which, at the time, are engaged in war in Vietnam. He is charged with draft evasion and subsequently stripped of the heavyweight championship following nine successful title defenses.

1970 – Oct 26. Returns from 3¾ years of inactivity to defeat Jerry Quarry by a third-round technical knockout in Atlanta.

1971 – Mar 8. In the first ever battle of unbeaten heavyweight champions, loses a 15-round decision to “Smokin” Joe Frazier at Madison Square Garden in New York. The bout is known as “The Fight of the Century.” Vindicated by the U.S. Supreme Court for his stand against the Vietnam War.

1973 – Mar 31. Loses a 12-round split decision to Ken Norton and suffers a broken jaw in San Diego, California, Ali’s second career setback. He gets his revenge on Sept 10, in Los Angeles, also by split decision.

1974 – Oct 30. Becomes the second man in boxing history (the other being Floyd Patterson) to regain the heavyweight championship by knocking out George Foreman in the eighth round in “The Rumble in the Jungle.”

1975 – Oct 1. Defeats Joe Frazier by a 14th-round technical knockout in their rubber match in the Philippines. The bout is known as “The Thrilla in Manila”

1976 – Sept 28. Wins another rubber match, this time controversially, over Ken Norton by a 15-round unanimous decision at Yankee Stadium in New York.

1978 – Feb 15. In a stunning upset, loses heavyweight championship to Leon Spinks by a 15-round split decision. Regains the WBA version of the title, for a record third time, on Sept 15, by outpointing Spinks in 15 rounds in New Orleans.

1980 – Oct 2. Returns and is stopped for the first and only time in his professional career by WBC titleholder Larry Holmes. Ali’s corner stopped the fight after 10 rounds.

1996 – Debilitated by his condition, Ali displays incredible bravery to light the Olympic torch in Atlanta.

2016 – Dies in a Phoenix-area hospital at the age of 74 after a short battle with respiratory illness.