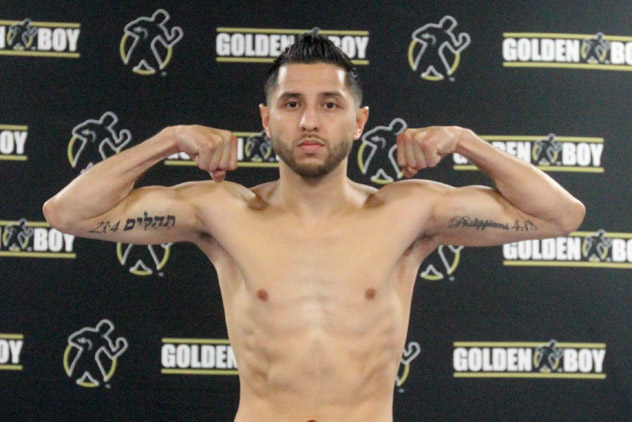 Abraham Lopez was very close to permanently leaving the sport of boxing. And no one would have noticed.

He had not fought for several months and had completed his degree in respiratory therapy. Putting on scrubs instead of gloves was enticing but Lopez still had unfinished business to attend.

That unfinished business leads to Saturday night when he squares off against a fellow unbeaten featherweight.

Lopez will face Julian Ramirez at the StubHub Center in Carson, California. The 10-round bout will precede the anticipated showdown between WBC junior lightweight titleholder Francisco Vargas and Orlando Salido.

In March of 2012, Lopez scored a unanimous decision win over Gabriel Tolmajyan. Afterward, Lopez did not fight for three years, although he was training and waiting for fights to come his way.

Those opportunities never came for Lopez, so the 28-year-old completed his degree. He can now practice as a respiratory therapist and has been offered employment in the field of medicine at clinics and hospitals.

But the fight game is where his heart is at the moment.

“To me, it lit a fire and it became a big flame,” Lopez told RingTV. “Seeing people that I knew I put hands on during sparring and seeing them getting world title shots – even a world title. It made me very angry, which is a surprise, since I’m a nice guy. I’m back in the ring and I’m here to take everyone’s head off.”

He returned to the ring three years after the Tolmajyan fight on March 20 of last year. The fighter from nearby La Puente understandably displayed ring rust in a majority draw after eight rounds against gatekeeper Juan Carlos Martinez.

Since the Martinez fight, Lopez (20-0-1, 15 knockouts) has scored three consecutive knockout wins, the latest on Jan. 29, when he stopped Carlos Valcarcel after the seventh round.

He squares off against Ramirez (16-0, 8 KOs) Saturday night, a southpaw who is five years his junior and, like Lopez, fights under the Golden Boy Promotions banner.

A young prospect fighting under brighter lights and a larger audience could affect many fighters but Lopez believes being calm and collected goes a long way.

“I think I (can) overpower him. I have the strength. I have speed. I have more punching power. I think that gives me the advantage in the ring. That’s why I accepted the fight. I’m not going to be afraid of anybody.”

Lopez, Ramirez, along with Joseph Diaz Jr., Manuel “Tino” Avila and Ronny Rios, are part of a nucleus of young featherweights.

Diaz seems to be the fighter at the head of the class but Lopez is not shy about wanting to face the best in his division.

“That’s fine. I can take them all at the same time. I don’t care. I’m here to fight. I’m not here to pick and choose fighters. I think that’s what the fans want. I’ll fight whoever they tell me to fight.

“I want to honestly leave a good impression on the 126 (-pound division) because it’s a tough weight class. There’s a lot of competition in there.”

The winner of Saturday’s clash between Lopez and Ramirez could take a major step toward contender status. An impressive performance could put Lopez or Ramirez in a fight against Diaz or a bigger money fight.

While keeping an eye on the future toward a career in respiratory therapy, Lopez is looking to make the most of his opportunities today, including a win over Ramirez.

“I know it’s important but, to me, it’s another day at the office. I got to do what I have to do to get that “W.” I believe in my boxing ability. If I’m able stop him, that’s great. If not, at least to dominate him over the whole 10 rounds. Whatever it takes.

“I think my boxing abilities (are) greater than most fighters. I want to win and I’m going to win.”