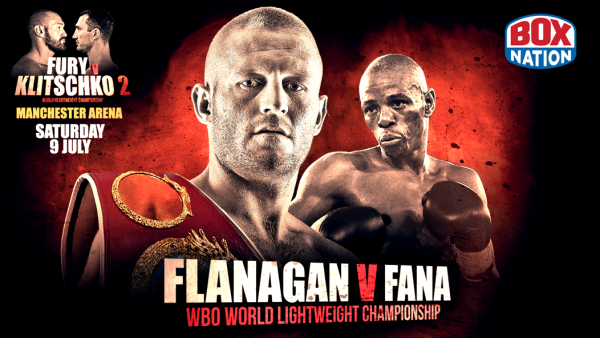 Terry Flanagan, the first Englishman to win a lightweight world title, will return home to Manchester, England on the Tyson Fury-Wladimir Klitschko undercard on July 9 to defend his title, it was announced on Wednesday.

The WBO lightweight titleholder is scheduled to face South Africa’s Mzonke Fana at Manchester Arena in the chief supporting bout of the heavyweight rematch for THE RING, WBO and WBA titles. While the main event will be on HBO, it doesn’t appear at the moment that Flanagan’s match will also appear on the network.

The 42-year-old Fana (38-9, 16 knockouts) is a former two-time junior lightweight titleholder and is just 7-5 in his last 12 fights, though he has been active, fighting six times last year. He last held a world title five years ago. The 26-year-old Flanagan (30-0, 12 KOs) won the vacant WBO lightweight title last July when Jose Zepeda couldn’t come out for the third round because of a dislocated left shoulder.

“It doesn’t get any bigger than fighting as chief support and right before the lineal heavyweight championship of the world,” Flanagan said in a press release of the third defense of his title. “The world will be watching as a fellow Manchester man Tyson Fury aims to show he’s the best heavyweight on the planet once again.” He added, “Fana is a two-time world champion at super-featherweight, he’s highly experienced, tough and has a very good jab. He will be coming over here looking to take my title but it’s not going to happen.”

Flanagan is looking forward to fighting in his hometown of Manchester; the arena is just a five-minute walk from his residence. “There’s going to be 20,000 Mancunians cheering on two of their own in world title fights,” he said. “I’m going to pick up where I left off and continue to show everyone that I am the number one lightweight in the world.”