Cameron Dunkin: ‘The future is bright’ 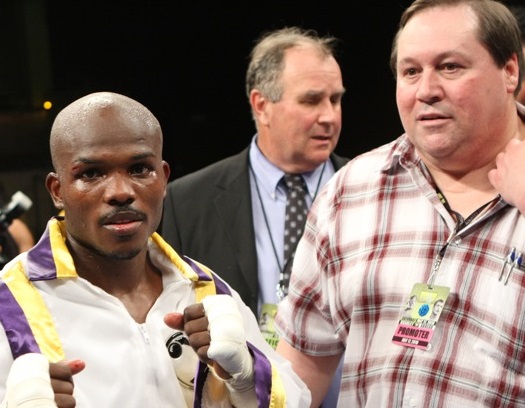 31
May
by Coyote Duran

You’ll have a tough time finding a boxing manager over the past 30 years who has enjoyed the success of Cameron Dunkin.

The Las Vegas-based manager has worked with 34 world champions since coming into the sport in the late-1980s, many of those he’s built from the grass roots level of the sport.
Over the years, Dunkin has guided many boxers to world glory, including Kelly Pavlik, Tim Bradley, Brandon Rios, Diego Corrales, Steve Johnston, Mikey Garcia, Freddie Norwood, Steve Luevano, Johnny Tapia, Marc Johnson and Danny Romero.
“I’m lucky; I’ve worked with a lot of top fighters in my time,” Dunkin proudly told RingTV.com, “and I hope to continue that for many years to come. I’ve had a lot of terrific nights in this sport.” When asked to choose a highlight, the low-key Dunkin replied, “Wow, that’s a tough question; I could talk to you for hours about that (laughs).

“Pavlik winning the middleweight championship in (Atlantic City) was special. We’d worked with him for seven years and got him his shot. He was the underdog and he came good, knocking out Jermain Taylor. I’ll always remember that night.

“Working with Tapia and Romero, back in the day, was fun. Tapia was a great guy; I still miss him today. Corrales, there was never a dull moment (laughs), same deal with Norwood. (Nonito) Donaire knocking out (Vic) Darchinyan was sensational. Rios winning the title and having a three-fight series with (Mike) Alvarado was another highlight. Bradley beating (Manny) Pacquiao also.

“There really are too many to single out one. I’m actually excited about some of my young guys now. They may be stars in a few years time.”

It appears WBO welterweight titleholder Jessie Vargas will also have a unification bout when he meets IBF titlist Kell Brook in late August or early September in England.

Also, four-division world champion Nonito Donaire looks like he will defend his WBO junior featherweight crown in the Philippines in September against his mandatory challenger Jessie Magdaleno.

Meanwhile, Brandon Rios is on the comeback trail after a disappointing effort versus Tim Bradley. Rios attended the recent Crawford-Postol press conference and appeared to be in very good shape. It is believed that he is somewhere in the 150s. An in-shape, motivated Rios could still be capable of making some exciting fights.

“I like them guys,” he said. “I think there’s some real potential amongst them. We’re grooming them ready for their opportunities. Everyone’s at a different stage of their careers. Some guys are ready to go sooner than others. Take Pavlik, for example. Like I told you, he took seven years; some people would have put them in earlier than that. He wasn’t quite ready then; we let him work his apprenticeship and, when he was ready, you all saw the results.”

“Oh my, those guys, they’re terrific; I’m very exciting about them,” he said. “I think they have real potential. I believe they all have the capabilities to not only win world titles but be staples of HBO’s programming and pound-for-pound-type guys taking the sport into the next decade.”

While those words appear lofty praise, they all look to have vast potential. Dunkin’s not a man who deals with fighters who are anything other than elite.

Rumor has it that Dunkin is in the process of signing a few more top-drawer fighters to his already impressive stable. However, for now, he refused to be drawn on that matter.

“I can’t say just now,” he said adding, “But you guys will be the first to know when the deals are done. All I will say isÔÇªthe future is bright. I’m more excited now than I have been in years.”

Dunkin, is known in boxing circles as a shrewd operator who drives a hard bargain, while doing the best for his fighters.