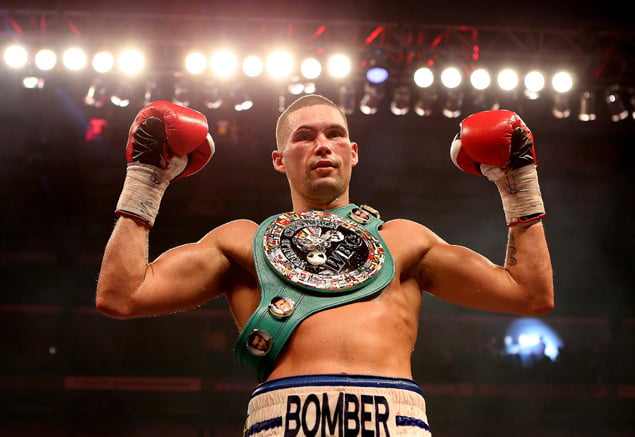 29
May
by Elliot Worsell

Although for years Tony Bellew has gone about his business as “The Bomber,” a self-proclaimed “smashing machine,” and has spoken of God-given power, it wasn’t until this evening at his beloved Goodison Park (home of Everton Football Club) that the boasts and the bravado finally made sense and it all came together for him on the world stage. Bellew, in his third stab at a world championship, impressively demolished Congo’s Ilunga Makabu in the third round of a vacant WBC cruiserweight title fight which saw both men hit the deck. He dropped bombs, he was a smashing machine, he showed power. Better still, he walked the walk.

An underdog beforehand, Bellew, 33, showed none of the uncertainty and caution which had blighted some of his previous big fights and was straight down to business from the get-go, controlling the centre of the ring behind his jab and using every inch of his height and reach advantage to maneuver Makabu around the perimeter.

Makabu, of course, has a well-earned reputation for power. The 28-year-old has halted eighteen of nineteen victims within the scheduled distance and is one of only two men to stop former light heavyweight champion Glen Johnson. To see him adopt a cagey approach, therefore, whereby he seemed happy to set traps and bide his time on the back foot, served only to excite an already primed Bellew. It showed in the Englishman’s work, too, as feeling-out left jabs and rangefinder rights quickly made way for body shots and uppercuts thrown up close with Makabu against the ropes.

But then came the smile. Wry and knowing, it suggested Makabu was far from uncomfortable, let alone wounded. After that he shrugged his shoulders, forced Bellew to retreat following a couple of exploratory southpaw jabs, and then dropped the Liverpool hero with a straight left hand. It was made to look easy. Effortless.

With that, all Bellew’s good work was undone. Feet caught square, he was knocked down in Round 1, humiliated rather than hurt, and forced to get up and regroup.

Dave Coldwell, Bellew’s trainer, told his man between rounds it was only a lapse in concentration which triggered the knockdown. He then begged him to switch on and forget entertaining the crowd.

It was a plan Bellew executed in Round 2 as he created distance, tamed Makabu behind his jab, and attacked only sparingly; whereas before he outstayed his welcome and got drunk on success, Bellew now flurried only to assert dominance and then took a crucial step back once content.

And yet, regardless of lessons learnt, there was no curbing Bellew’s belief in his power, nor his desire to put on a show. Consequently, when Makabu decided to goad an onslaught out of him in Round 3, almost inviting Bellew to tee off, the proud Evertonian wasn’t likely to pass up the opportunity.

Good move, too, because Makabu’s blind faith in his own power would, ultimately, lead to his undoing; confidence in his ability to end the fight with one punch encouraged him to lure Bellew into a shootout and then linger in the pocket far longer than anyone would advise. Granted, shots missed at first. They caught gloves, shoulders and forearms. Some were wayward. But then Bellew gathered momentum, grew in stature, and started planting his feet and really letting his hands go. He dug his toes into the canvas and invested all he had in vicious right crosses and left hooks. Now not so many were missing. Now most of them pierced through Makabu’s guard and landed flush on a stationery target.

Such was his stubbornness and inexperience, though, Makabu, now 19-2, simply stayed put. He feigned composure. He continued throwing back. He remained convinced his power would prevail.

He was wrong. Bellew, the man in the ascendency, seized his moment and refused to let him escape. Once trapped, more right crosses were uncorked on Makabu, this time straighter and to the point, before a final left hook cracked his unprotected chin and sent him plummeting to the canvas a minute and twenty seconds into the round.

Out cold, no need for a count, it was the type of conclusive and devastating finish “The Bomber” had teased for years.