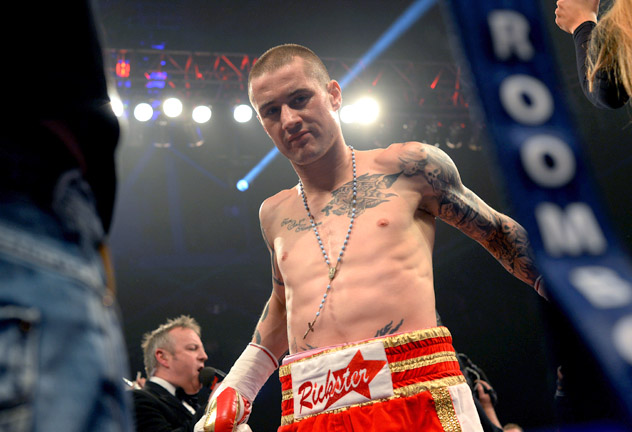 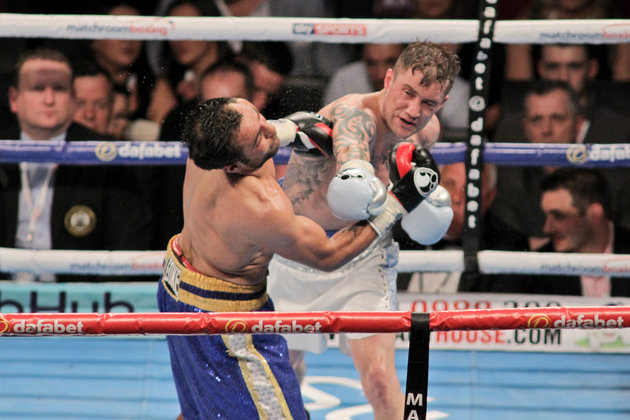 It’s been a long time since a Scottish boxing venue echoed with the sound of world title triumph and it was a familiar face that brought it back.

Ricky Burns punched his way into boxing history by becoming his country’s first ever three-weight world titleholder with an eighth-round stoppage of Michele Di Rocco earning him the vacant WBA junior welterweight strap in Glasgow on Saturday. The official time was 1:57.

Burns, a former junior lightweight and lightweight belt holder, decked Di Rocco in the third and closed the show with a variety of sickening power shots that rendered his opponent helpless and forced referee Terry O’Connor to intervene.

“You’ve no idea what this means to me,” said Burns during his post-fight interview. “Everything we’ve been working on in the gym worked and I couldn’t believe how easy it was. I want to thank my team and everyone who came out tonight.

“There’s some big fights out there for me now.”

It was like the good old days for a patriotic home crowd who cheered wildly every time Burns had success – and there was plenty of that. A pair of rights landed flush in Round 1 and one memorable jab sent Di Rocco tottering across the ring.

Very early it was clear that Burns possessed superior technical craft and that combined with adept lateral movement had the Italian chasing shadows.

A combination of sharp straight shots decked Di Rocco in his own corner in Round 3 but Burns was prevented from following up by an untimely bell. The action was one-way and the Italian’s crude attempts were easily avoided as he was repeatedly made to flounder.

Sensing that his big chance was slipping away, Di Rocco attacked with fury in the sixth but, again, the attempts lacked imagination and his balance was poor. Burns closed that session with the best punch of the fight, a busting right hand that was repeated seconds later.

Di Rocco was in sparring-partner mode after the midway point and his body language was that of a loser. The Italian was being tuned up and hit with every punch in the book before the stoppage: repeat right hands, punishing body shots, uppercuts to the head – it was a brutal and sustained attack.

Ever since his days as an amateur, Burns has carried two hallmarks that are indispensable for any successful athlete: hard work and perseverance.

It is justifiable to criticize Di Rocco’s lack of experience at world level. Burns came in with the vastly superior resume; having shared the ring with Roman Martinez, Michael Katsidis, Kevin Mitchell, Terence Crawford, Raymundo Beltran and Omar Figueroa. Di Rocco, however, was natural at the weight, a solid European champion and unbeaten for almost a decade.

Burns (40-5-1, 14 KOs) has had more than one reason to call time on a remarkable career but tonight he earned the right to prolong it in the spotlight and deserves full respect.

Tyrone Nurse (33-2-1, 7 KOs) retained his British junior welterweight title with a ninth-round stoppage of Scotsman Willie Limond. Nurse weathered an early storm from the challenger, who had previously held British and Commonwealth straps, but took complete control before the midway point. Limond was bleeding heavily from facial lacerations and was hurt badly by vicious left hooks to the body when referee Victor Loughlin made a mercy stoppage. There were no knockdowns.