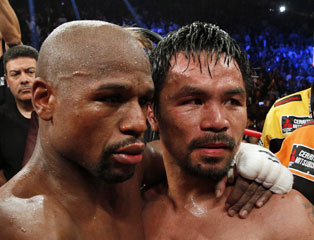 Floyd Mayweather Jr. and Manny Pacquiao were the Fighters of the Decade for the 2000s and the 2010s.
25
May
by Mitch Abramson 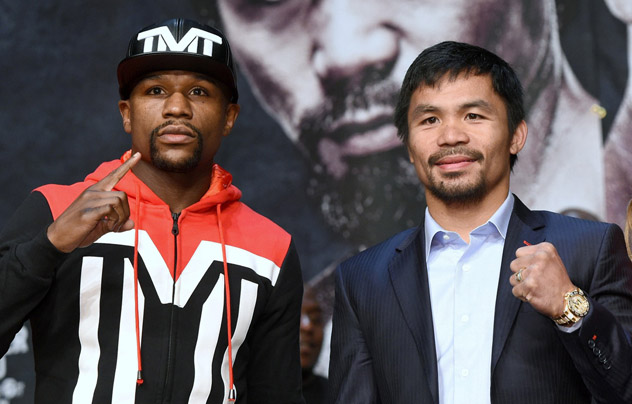 The fight that persists in the public mind like a migraine headache has a new gripe.

Showtime Networks Inc. is suing Top Rank Inc. in New York federal court for having to defend itself in a number of class-action lawsuits that resulted from Floyd Mayweather Jr.’s victory against Manny Pacquiao last May.

Showtime (SNI) filed the suit on Wednesday and alleges that Top Rank (TRI) failed to fulfill an indemnification agreement to shield Showtime from being sued. Showtime is suing to get reimbursed for legal fees totaling nearly $700,000 it claims to have paid to defend itself in suits brought on by viewers who felt ripped off after Pacquiao acknowledged in the post-fight news conference he had suffered the injury in sparring before the fight. Showtime was a co-defendant in these suits, along with HBO, Top Rank and Mayweather Promotions.

Top Rank CEO Bob Arum, who regularly does business with HBO instead of Showtime, claims he was in settlement talks with Showtime when the suit was filed. The news of the lawsuit was first reported by the Hollywood Reporter. “They say to me, ‘If we don’t pay the thing then we’ll never do business with CBS and Showtime,'” Arum told RingTV.com of an apparent conversation he had with Showtime reps regarding settlement talks. “So I said to them, ‘What the (expletive) is new? You haven’t done business with us in six years anyway.”

Showtime, which did a joint-broadcast with HBO on the fight, released a statement to RingTV.com on Wednesday explaining its position in the suit. Mayweather-Pacquiao was the highest-grossing fight ever with more than $600 million in total revenue. It was also one of the most contentious with a trail of lawsuits and angry fans in its path.

“Showtime Networks today filed suit against Top Rank in the Southern District of New York to enforce Showtime Networks’ right to be reimbursed for legal fees incurred defending the many lawsuits filed relating to the injury sustained by Manny Pacquiao before his May 2, 2015 fight against Floyd Mayweather,” the statement read. “Showtime was dismissed from those litigations which continue against Top Rank. Showtime made every effort to resolve this matter short of the courthouse, but Top Rank’s persistent refusal to honor its contractual obligations forced Showtime to take this regrettable, but necessary, step.”

The lawsuit details how Pacquiao admitted after the bout he had fought with a right shoulder injury, according to a copy of the complaint obtained by RingTV.com. Fans already upset with the lack of aggression in the fight were further irritated by Pacquiao’s confession and sued.

“Under an agreement among SNI, TRI and others, TRI was obligated to defend and indemnify SNI,” reads the complaint. “But at the outset of these actions, it was manifest that SNI and TRI, which was alleged to have known of and concealed the pre-fight injury, had starkly different interests. … At once, SNI demanded that TRI honor its contractual obligations to indemnify SNI and pay for SNI’s own counsel to defend it in these actions because of the manifest potential conflict between them. TRI refused.”

Top Rank claims a conflict didn’t exist in the complaint. Arum believes the case will come down to how the contract is construed. “Our argument is that, no, under the contract they’re not entitled to any indemnity,” Arum told RingTV.com. “It’s something for interpretation and we were negotiating with them on a settlement and they filed the lawsuit. Well, OK, so, we’ll defend ourselves. But this is the kind of lawsuit that shouldn’t be very protracted because it’s a question of the interpretation of the contract — as simple as that. We feel confident in our position.”