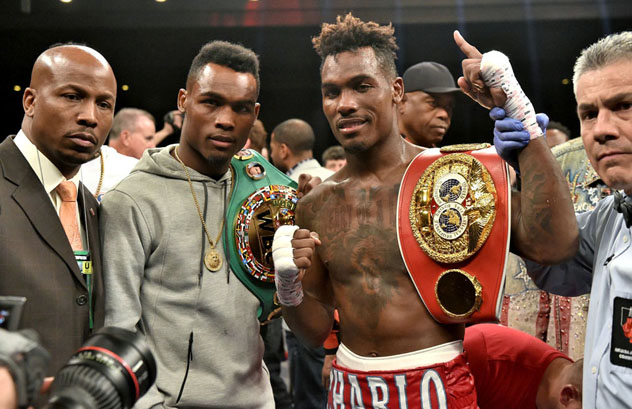 21
May
by Andreas Hale

LAS VEGAS — The Charlo brothers made history on Saturday night by becoming the first twin brothers to hold world titles at the same time in the same weight class. Both Jermell and Jermall won their respective fights at The Chelsea inside of The Cosmopolitan of Las Vegas as part of the Showtime Championship Boxing Tripleheader.

Jermell Charlo held up his end of the bargain by scoring a scintillating eighth-round TKO over John Jackson to claim the vacant WBC junior middleweight title despite being down big on every single scorecard.

The son of legendary slugger Julian Jackson didn’t give much for Charlo to hit in the early going as the younger twin struggled to cut off the ring. It was a picture-perfect game plan that forced Charlo to fight from behind, as Jackson would occasionally pop in with a hard shot to disrupt any rhythm that Charlo sought to gain. 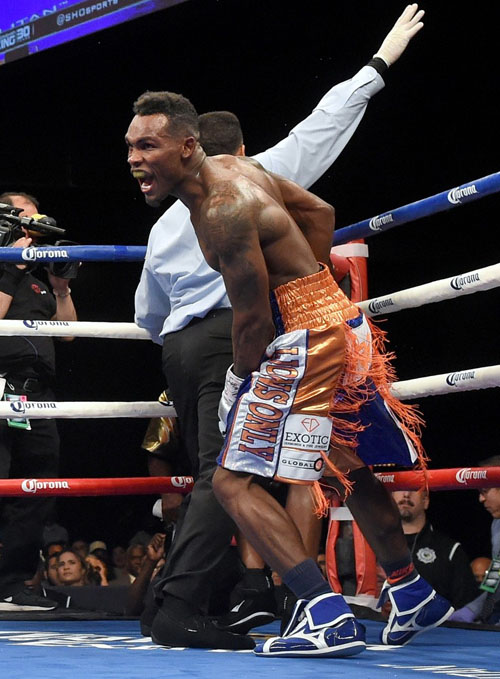 Charlo (28-0, 13 knockouts) did his best work in the fifth round and landed some stiff power shots but was unable to control the fight as Jackson (20-3, 15 KOs) went right back to effectively boxing in the sixth and seventh rounds. But it all came crashing down when Charlo uncorked a hellacious right hand that caught Jackson flush in the eighth. Although Jackson, to his credit, stayed upright, he was clearly separated from his senses. Charlo rushed in and launched into a fight-ending series of punches that caused referee Tony Weeks to call a halt to the fight at the 51-second mark.

At the time of stoppage, Charlo was down 69-64 on all three scorecards.

“I was behind,” Charlo said after the fight. “He was boxing, he was moving around a lot. That was unexpected of him. I thought he was going to come out to brawl. I had to make an adjustment and I did.”

As for the finish, Charlo knew what needed to be done once he found a small opening to take advantage of.

Referring to the fact that, for the time being, he and his twin were both titleholders: “It’s history. We did it. A lot of fighters don’t come out of Houston and we did it. We’ve been boxing for all of these years and it had to happen.”

Then it was up to Jermall Charlo, who passed his test by pulling out a hard-fought unanimous decision victory over Austin Trout to retain his IBF junior middleweight title.

But, just like his brother, it wasn’t a cakewalk by any stretch of the imagination.

Charlo (24-0, 18 KOs) started off well by remaining poised and firing the jab to establish range. Unlike his brother, Jermall did a better job of cutting off the ring and followed his jab with a heavy right hand or an uppercut that caused some damage on Trout’s right eye. As the fight progressed, it appeared that Trout was slowing down and his lateral movement wasn’t what it was earlier. It caused Charlo to get a little knockout happy, which opened him up to hard counters in the middle rounds whenever he overcommitted with the right hand. 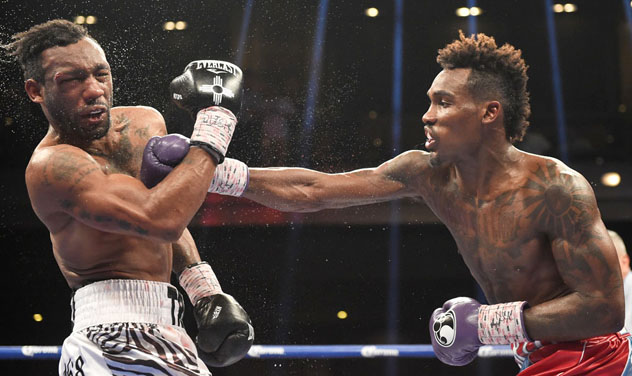 It was a mild adjustment by Trout (30-3, 17 KOs) but one that worked to close the distance in the fight and make it competitive. Although Charlo was the aggressor, it was Trout who would be the more effective counterpuncher as the fight progressed. But with a lack of power, the counterpunching never put the champion in any danger. The seventh round proved to be one of the better rounds from “No Doubt” as he put together some crisp combinations that finally backed Charlo up. However, it was the jab and work rate of Charlo that ended up being the difference maker as he pulled out the decision with scores of 115-113, 116-112 and 116-112.

“Austin is a hell of a fighter,” Charlo said afterward. He outlanded his opponent 130-117. “He’s a beast. It was a great experience. This was my first time going 12, but it didn’t matter because I knew I was in shape.”

There had been talk of Charlo moving up to 160 pounds but he shot those down shortly after retaining his title.

“I changed my mind — we’re going to stay right here. Fifty-four wasn’t as bad as everyone made it,” he said.

As for history, Charlo was happy that both he and his brother proved that they can compete with the best that boxing has to offer at junior middleweight.

“It felt good because I knew my brother would get the job done. We belong on this level. We need these titles to get the big fights and we’re going to keep these titles to keep rising.”